Visiting the Most Popular Greek Islands

There are some places on earth you have to see to believe, because you can’t possibly imagine them in all of their vivid colors, smells, sounds and tastes. Greece, with its countless picturesque, ancient and famed islands, is one of those places.

No matter how many times I visit, I’m always stunned by the impossibly beautiful vistas from Santorini’s steep cliffs; intoxicated by the juicy freshness of Greek tomatoes, feta cheese, grilled octopus and squid; and altogether charmed by the many whitewashed villages and quaint, labyrinthian island towns that beckon you in to while away an afternoon, or an entire week, exploring them further.

Island hopping is one of the best ways to experience this traveler’s bounty, as there are more sights and experiences than one could squeeze into a lifetime. Greece boasts as many as 6,000 islands—depending upon how you count—though only about 200 are inhabited. Mykonos, Santorini, Crete, Patmos, Rhodes, Symi, Chios- just to name a few!

Here are 3 of the most popular islands:

END_OF_DOCUMENT_TOKEN_TO_BE_REPLACED 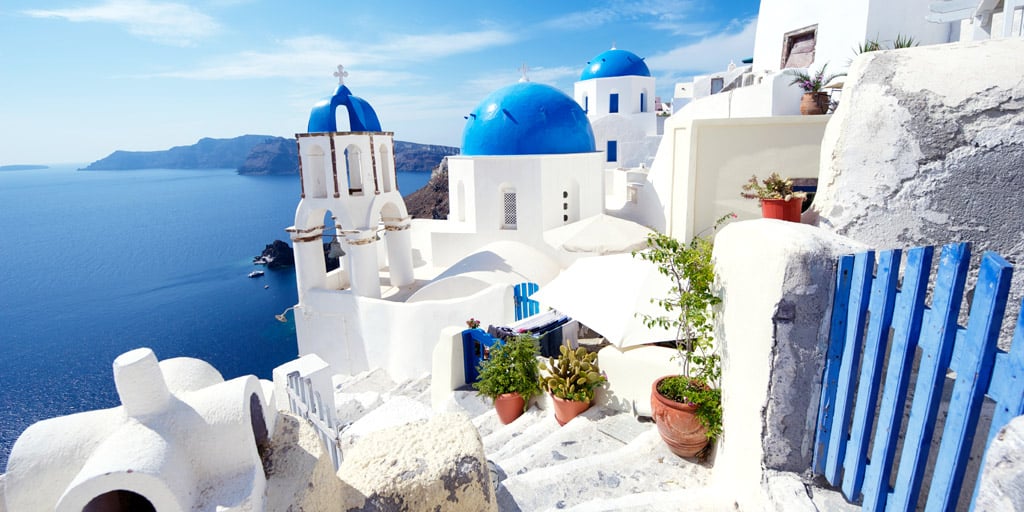 Another must-see on a Greek island itinerary is Santorini, (known as Thira or Thera by the Greeks), one of the world’s most photographed and famous islands. Some even go so far as to call the island’s village of Oia one of the most beautiful and romantic sights on earth.

But this is no ordinary island. Santorini is a large volcano that has repeatedly exploded and collapsed, leaving a ring of steep cliffs surrounding a large water-filled caldera. Its eruption around 1,650 B.C. is the largest in recorded history, rumored to have wiped out the Minoan civilization on Crete and caused havoc in Egypt, throughout the Mediterranean, and as far away as China. But this tumultuous history is long past, and today Santorini is famous for its quiet, stunning beauty.

Santorini today is a magnet for the jet set, romance seekers, artists, photographers and those simply wanting to experience a slice of Greek island paradise at its finest. Arriving by boat, the clusters of Cycladic white houses scattered atop Santorini’s cliffs look like a light snowfall. When lit up at night, the homes resemble a glittering string of Christmas lights strung along the crescent-shaped island.

END_OF_DOCUMENT_TOKEN_TO_BE_REPLACED 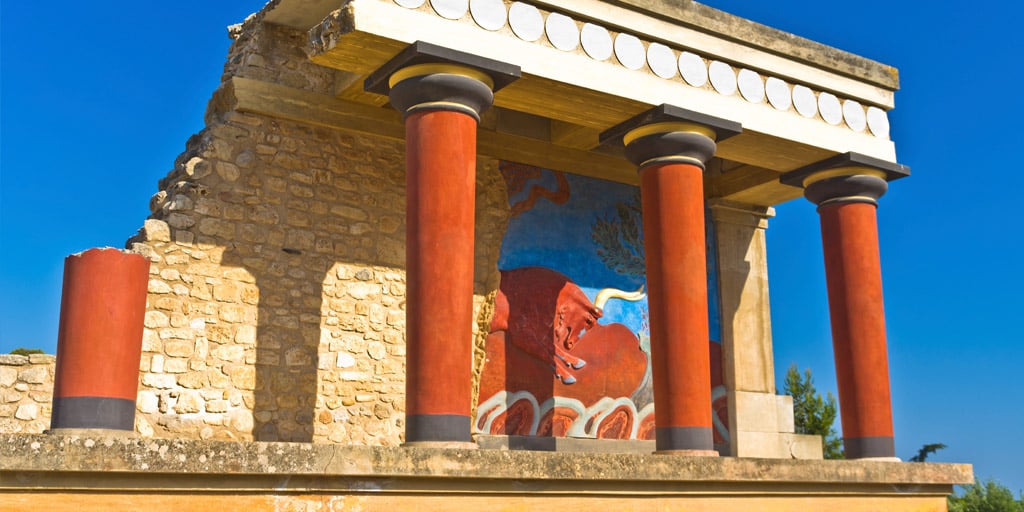 Crete, the largest Greek island, and among the most storied, is where I started my recent visit. The colorful history, legends and mystique surrounding the island are tied to many sources including that it once was the center of Minoan culture, the earliest recorded civilization in Europe. For mythology fans, the island is said to be the birthplace of Zeus. An island whose recorded history is more ancient than that of the European continent, Crete has been written about by Homer, Plato and Aristotle.

You could easily devote a week to exploring just this one island, which is home to stunning beaches, pastoral hillsides of olive trees, and magnificent gorges. I had merely an afternoon, which I spent wandering the mysterious Minoan ruins of Knossos and the Heraklion Archaeological Museum.

Knossos, Crete’s largest Bronze Age archaeological site, is thought to be Europe’s oldest city, and for 2,000 years it flourished as a civic, economic and religious center. Today, there’s little left of that original grandeur, but on portions of the site there are reconstructions of what the original buildings might have looked like, assembled by archaeologists in the early 1900s.

What you will see during a visit is a series of workrooms, storerooms and living spaces surrounding a central square. The highlight is the complex’s royal domestic chambers. The most complete portion of the former palace complex, these rooms provide the best sense of Knossos’ past glory and sophistication. In the Queen’s Megaron (bedroom) for instance, there’s an elaborate, playful fresco of dolphins, while in the adjoining rooms there’s a bathroom and beyond that, the Hall of the Double Axes – a large, airy, elegant room that belonged to the king.

END_OF_DOCUMENT_TOKEN_TO_BE_REPLACED

One of the most popular and bustling Greek islands, Mykonos offers everything from designer boutiques, to beautiful beaches, five star hotels and trendy nightclubs, all with a picturesque Cyclades island backdrop. In many ways it is an island to see and be seen, and party all night long, but it also offers much of the charm Greek island vacations are famous for. 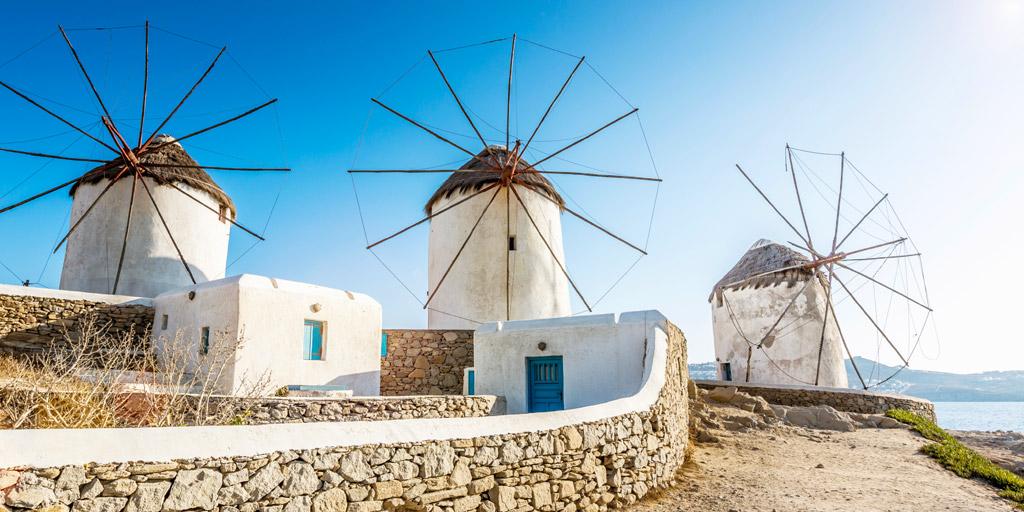 Mykonos Town is a warren of tiny winding streets, homes with colorful doors and tiny blue chapels that look as though they would barely accommodate one dozen people. The smell of freshly baked Baklava wafts from bakeries and lazy cats sleep in doorways. Three iconic Greek windmills stand watch over the town, and there is no better place to enjoy them or the ocean view, then from “Little Venice” – a charming quarter that seems to spill out into the Aegean, it’s bars and cafes built right up to the water’s edge, waves lapping at their foundations. But getting a seat here early is essential, because watching the sun set from Little Venice is on nearly every visitor’s agenda and tourism is Mykonos’ number one industry. 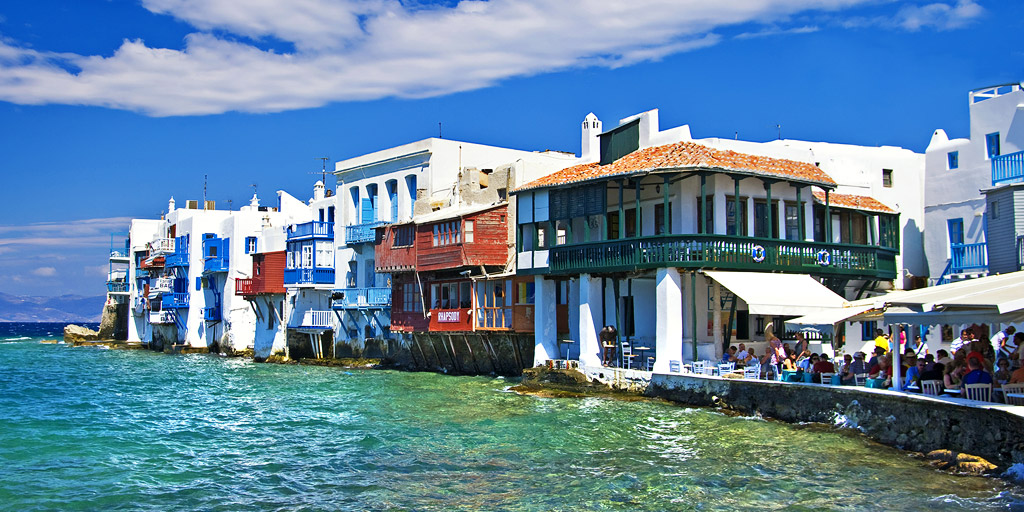 Beyond the reaches of cosmopolitan Mykonos Town, there are smaller and quieter coves and villages, including the charming Ornos, where it’s easy to while away an afternoon or an evening at a tiny restaurant, sipping on Ouzo and dining on freshly caught local seafood.

The appeal of small ships

It’s safe to say I’ve never really been a cruise person, but 10 days cruising the Greek islands changed that point of view.

Sailing effortlessly from one colorful port to the next, visiting islands big and small, touring charming Cycladic villages, intriguing archaeological sites and sleepy out-of-the-way beaches, I suddenly realized the value, ease and possibility that comes with touring this way.

There is a certain delight in waking up in a new location each morning, the sun rising outside your cabin window to illuminate all the colors and sights of a new port. There’s also a comforting feeling each night as you drift off to sleep, knowing that the chore of traveling to a new destination will be taking place while you rest.

With thousands of islands large and small spread over only a few hundred miles, Greece is uniquely suited to island-hopping.

And touring the Greek islands via a small ship allows you to visit a long list of destinations in a compressed period of time. In some cases, you can tour one island in the morning and enjoy dinner on another that evening—without feeling rushed. Trying to coordinate visits to this many islands on your own would be logistically daunting, to say the least.

Halfway through my recent trip, I started thinking about Jackie Kennedy and her days sailing amid the Greek islands while being romanced by Aristotle Onassis. Suddenly this mode of travel took on a whole new meaning and historically glamorous appeal. 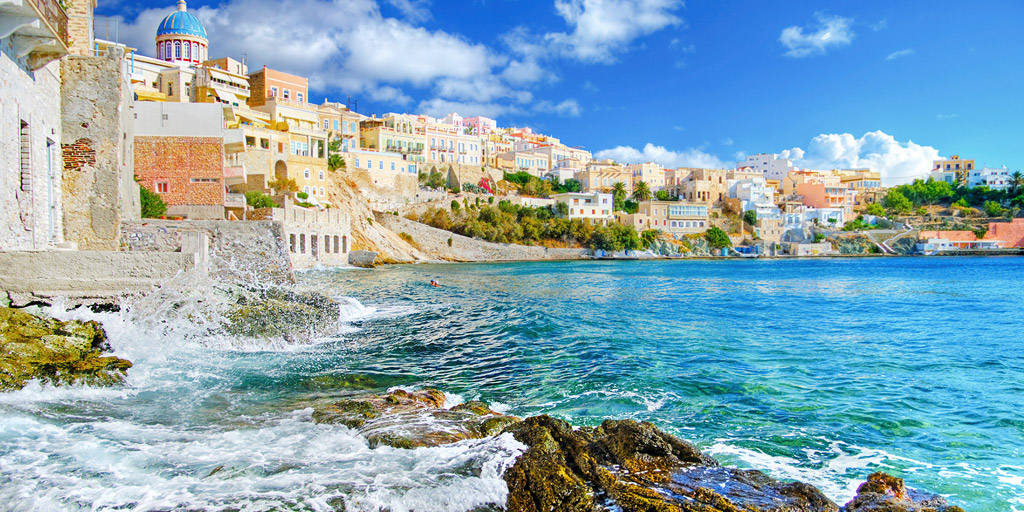 For my recent journey, I sailed with Celestyal Cruises, a Greece-based company. With small ships, Celeystal is able to access tinier harbors that the large cruise ships cannot — a feature that sets the company apart and allows its cruises to include charming, less frequented ports of call.

My island hopping was divided between two different cruise itineraries — one that focused on the iconic Aegean islands: Mykonos, Santorini, Patmos, Crete and Rhodes and a second that highlighted smaller, more idyllic ports and lesser-known islands like Samos, Milos, Syros, Kos and Ios.

I also appreciated the fascinating variety of pre-arranged, hassle-free excursions on each island. There were options for those interested in scenery, culture, fine dining or merely beach hopping, or a little bit of all of the above.

When touring the island of Kos for instance, the excursions included visiting local, family-run wineries and honey makers; spending the day lounging on remote, pristine beaches or touring the intriguing archaeological ruins of Askleipion, which date to around 400 B.C. Often, there were simply too many tempting choices to squeeze into a single day’s visit.

There was a similar variety of choices on Ios — including whiling away the day on the pristine Maganari Beach, touring the pre-historic ruins of Skarkos, and meandering through the charming Chora village, where picturesque white cube houses and narrow stone streets cling to a steep hillside and offer dramatic views of the bay below.

On Mykonos, I enjoyed dinner in an incredibly quaint and charming beachfront restaurant in Ornos that I probably would not have found were it not for the cruise company. The small community offered a quiet, idyllic place to dine and escape thecrowds of Mykonos Town. A smattering of kids played in the water a few hundred yards from my open-air table. Sailboats bobbed quietly in the cove before me, and lights from the houses cascading down the nearby hillside twinkled, as the sun slipped beneath the horizon. 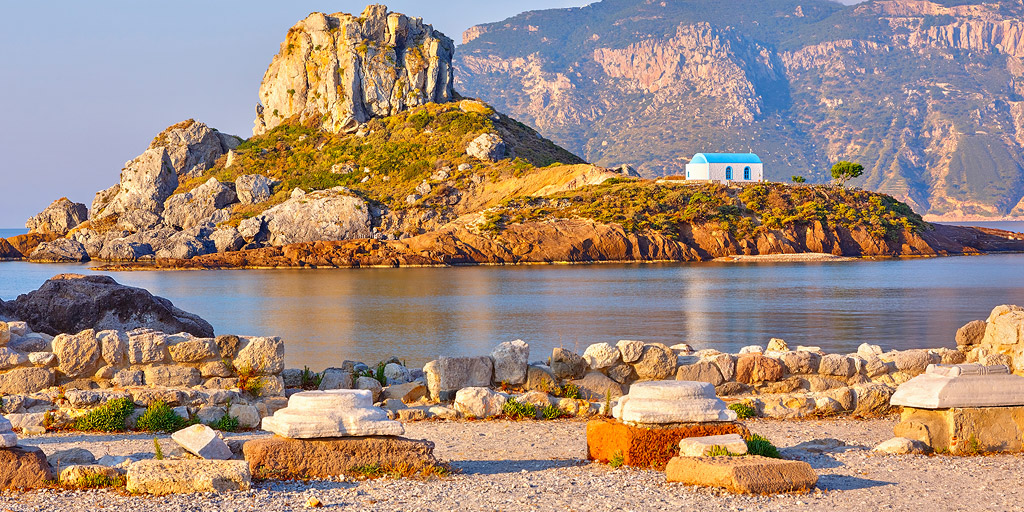 Traveling with Relaxation and Comfort

After a long day exploring archaeological ruins or wandering down the winding, cobblestone streets of the many small villages we visited, I was ready for a little rest and relaxation.

Back on the ship I found the perfect antidote in the spa, where each afternoon I pampered myself as we sailed from port to port — choosing a facial one day, a pedicure, foot and leg massage the next. I also enjoyed lounging on the poolside deck as we cruised through the impossibly blue waters of the Aegean, observing the island scenery as we sailed.

And because I did not have to waste time packing and unpacking each day, I was able to focus more time on just relaxing, digging into a good book, or reading about our next destination. During our sailing time, Celestyal also showcased Greek culture with language lessons, dancing classes and mythology quizzes. 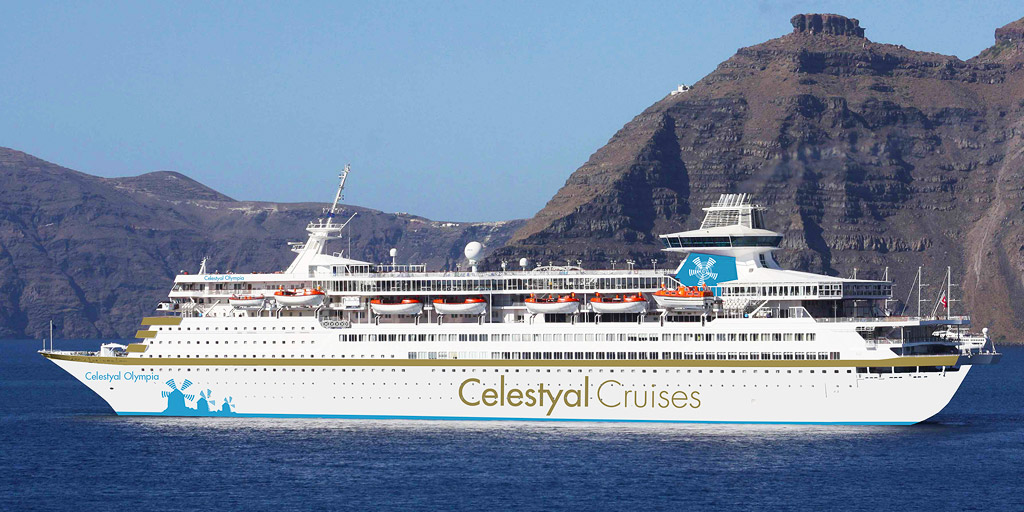 A trip I won’t soon forget

Visiting the Greek islands is easily a bucket list trip. The islands have long had a special glamour, mystique and allure associated with only a select group of other destinations. There’s a reason Jackie O, as she later came to be known, came back again and again.

And cruising from one island to the next, not worrying for a moment about how you will get from place to place, makes the experience all that much more pleasant. Instead of being distracted by any of the hassles of travel, I was free to focus on the many pleasures of vacationing in this fabulous part of the world.

What’s more, I took my trip amid the height of the Greek financial crisis. While news headlines around the world projected gloom and doom, and a descent into chaos for the country, the islands remained as they ever were: a quiet sanctuary from the cares of the world.