In early June, we brought to your attention the Trailblazer Foundation and their mission: building wells to bring poor villages in Cambodia clean, drinkable water. The Foundation is in dire need of a new truck so they can continue to deliver well building materials to outlying villages.

Their fundraising campaign to raise $7500 is coming to an end on Sunday, August 7th. Trailblazer was actually able to sell their old truck for $1500 and put the money towards the campaign. They now only need $1830 to reach their goal. That’s only 92 people donating $20! Once Trailblazer reaches their goal, we will match a final $2500 so they can purchase a brand new truck and continue serving the poor of Cambodia. If you would like to help us and Trailblazer reach the goal, you can donate any amount to their campaign on IndieGoGo.

And if you haven’t already, read below to learn more about Trailblazer and their amazing work.

Meet Chris Coats, co-founder with her husband, Scott, of The Trailblazer Foundation. Friendly Planet has supported Trailblazer since 2007, when we first discovered we could pay to dig wells in the Siem Reap area and help provide clean, potable water for the villagers surrounding the World Heritage site of Angkor Wat—a site that we visit on our tours. We’re proud to support the Trailblazer Foundation, and through our own Friendly Planet Foundation, we look forward to working together to help improve the lives of the villagers of Siem Reap who so graciously welcome us into their communities. The Trailblazer Foundation is currently running a fundraising campaign to help buy an equipment delivery truck, which they desperately need to continue their mission. To help raise awareness of the campaign, Chris took some time to tell us a little bit about herself and her husband, and why they started Trailblazer. She said:

I have been involved in some sort of volunteer or community service work for most of my life. This has included projects with my church and as a foster parent. Eventually, this personal commitment led me and my husband Scott to turn a short-term visit to Cambodia into a long-term project to support the people of Siem Reap province.

When our daughter was ready to head off to college, Scott and I saw our soon-to-be empty nest as an opportunity to dive deeper into community service work, and we knew we wanted to do that work in an international context. I began researching volunteer opportunities and planning for a long term experience.

In early 2001, Scott closed the doors on his custom furniture business, and I left my job with the school district. We set off to be international volunteers for projects in Fiji, Western Samoa, New Zealand, Kosovo, Estonia, Vietnam, and finally, Cambodia. During the next two years, through these experiences, we learned a lot about which rural community develop strategies worked well, and which ones didn’t. It became clear to us that a grassroots approach that empowered the people, coupled with a hands-on participatory practice, was the most effective way to ensure the success and sustainability of any rural community develop project. We knew what type of work we wanted to do. Now the question was where? 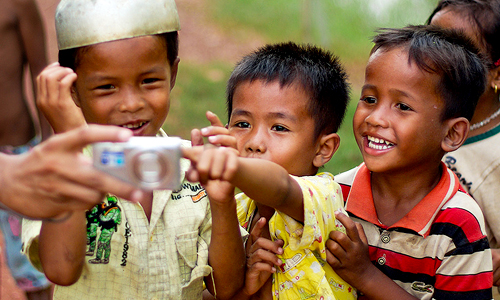 We first visited Cambodia in February 2002 while en route between volunteer placements in the South Pacific and Europe. We went as tourists to see the temples of Angkor Wat. The easiest way to describe what happened is to say we fell in love with the country and the Cambodian people. We could also easily see an obvious need for support, and Scott and I decided there and then that when we were finished with our existing commitments, we would return to Cambodia. We didn’t know what we were going to do when we returned or how we would make it happen. We simply knew there was a need, and we knew we wanted to help fill that need. We had the willingness to show up, the desire to work hard to help and the faith that we would find an important niche for our newly acquired skills in rural community development.

In 2003, we returned to Siem Reap with our daughter, to try and source out an established project to join, but we couldn’t find one we felt we could trust. Based on our previous volunteer experiences, it became clear to us that that in order to “do it right,” we would have to create our own organization. That was our impetus for co-founding Trailblazer Foundation in 2004.

In order to officially become a 501(c)(3) nonprofit organization, we had to decide on a specific purpose and project. In May 2004, I returned to Cambodia, specifically to the Siem Reap province. There, I met with officials at the Angkor Thom district of Siem Reap province who told us that a village called Sras needed a school. Sras was one of the poorest villages in the District, and the officials told us that no other organization would help there as it was too difficult a place to work. Despite the warning, we committed to building the school, promising we would return soon to start construction. That was the Trailblazer Foundation’s first project. 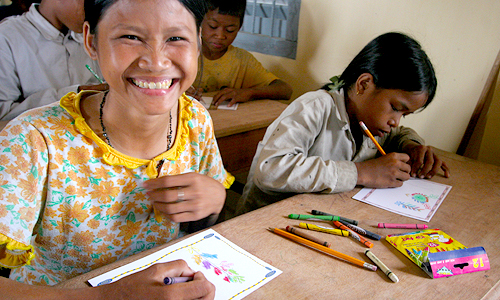 Having raised enough money to start our new professional adventure, Scott and I returned to Cambodia in January 2005. From the earliest days of our work on the school project, we realized that the lack of clean water available for families living in Sras village was a bigger problem than not having a school. After all, without potable water, kids were getting sick and were unable to attend school. Immediately, we decided to drill two wells at the school site to help resolve this huge problem. During the remainder of 2005, we focused on getting the proper infrastructure set up, establishing agreements with the appropriate government offices, opening a bank account, and raising the $55,000 needed for the project. We also found and hired a local Khmer to help us source a construction contractor, manage the project, and act as translator.

By December 2005, right around Christmas Day, we broke ground on the school project despite the fact that contributions were coming in too slowly to pay for the project. In order to finish it, I had to cash out a retirement fund, but what might have been a major sacrifice at the time was actually the beginning of better luck. In February 2006, we met a representative of the organization GlobalMedic, who introduced us to the bio-sand water filter, which would make water from our new wells even safer to drink. GlobalMedic donated a construction mold for these water filters to Trailblazer, thereby kicking off what has become a staple of Trailblazer’s work: our water filter project 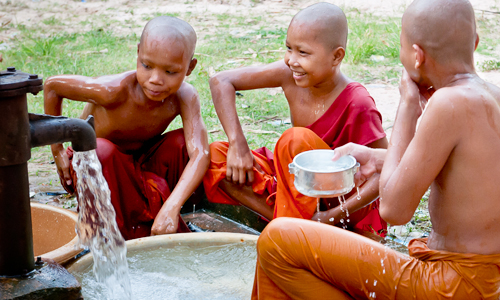 From a simple desire to help, and the faith to plunge ahead, Trailblazer’s programs in health, food security, education and economic development have evolved. From that very first school construction project in Sras village, Trailblazer has grown to become a successful organization helping thousands of people across fifty villages. It is an organization and a mission about which I am so proud.

And now, 12 years after we started, we find ourselves in need of a new equipment delivery truck, so we can continue to transport the necessary tools and materials to dig our wells and construct the pumps and filters in more villages. We’ve started a $10,000 fundraising campaign on IndieGoGo. If we can raise the first $7,500, Friendly Planet has agreed to chip in the final $2,500 to meet our goal.

The most important goal of this campaign is simply to raise awareness of the need for potable drinking water in Cambodia—if we do this, we have succeeded. However, if you can donate to our fundraising campaign, please visit our IndieGoGo campaign and find out how.