The following is a guest post from Kate Katubi, Reservations at Friendly Planet Travel. 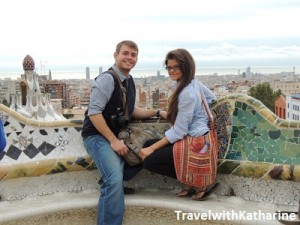 If Madrid is Spain’s historic and cultural matriarch, then Barcelona is its eccentric second cousin. While the two cities share the same flag, they couldn’t be more different. Barcelona shrugs off traditional Spanish customs in favor of a more free-spirited and whimsical culture. The Catalonian capital offers a rich history of modern architecture, world-class cuisine, and sun-drenched beaches, making it the ultimate European getaway.

While I returned from my trip to Barcelona a few years ago, I still catch myself daydreaming about fruity sangria, joyous street music, and mosaic dragons. If you’re considering a trip to breathtaking Barcelona, let me share my simple tips on how to best experience this phenomenal, energetic city.

Walk, don’t run. Barcelona is a pedestrian’s paradise. The city encompasses a mere 40 square miles, with the majority of sites in easy walking distance. For instance, walk to the Plaça de Sant Jaume, the center of the old city of Barcelona. Then visit Barcelona Cathedral, the city’s 15th century gothic cathedral dedicated to a martyred virgin. Next, stop at the awe-inspiring Picasso Museum. Near the old port, Port Vell, you can marvel at the sacred spirals of the basilica Santa Maria del Mar. Finally, visit Ciutadella Park, which, for decades, was one of the only green spaces in Barcelona.

For comfort, pack lightweight broken-in walking shoes to avoid blisters. Also, when going out for the evening, take care when walking on Barcelona’s famed cobblestone streets. While enchanting, they’re treacherous in heels. 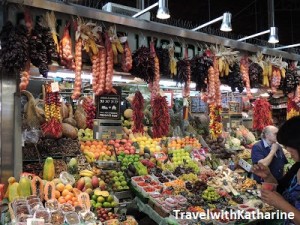 Be a picky eater. Barcelona’s restaurant scene is among the most unique, expansive, and exciting in the world. The local cuisine — a mixture of traditional Spanish seasonings and unbelievably fresh seafood — make it the perfect travel destination for even the most discerning foodie. With so many Michelin-starred restaurants and fresh foods to try however, it’s smart to be picky about what you eat. For example, paella is obviously the star of any Spanish feast, but don’t settle for the first touristy paella joint you see. Cookie-cutter restaurants focus on tourist turnover, not quality, leaving many guests (including myself) underwhelmed with the native specialty.

Instead, travel beyond the traditional tourist areas to try true local and inspiring foods. One of my personal favorite dishes was calamares en su tinta — squid cooked in its own ink and deep fried. It was decadent, surprising, and authentic.

For a true introduction to the local palette, stop by La Boqueria. This market features stall after stall of fishmongers, butchers, fruit and vegetable stands, and more. It’s the perfect introduction to Spanish cuisine. Plus, it’s also a great place to pick up some snacks or enjoy a cheap lunch to help cut down on food expenses while still eating authentically. 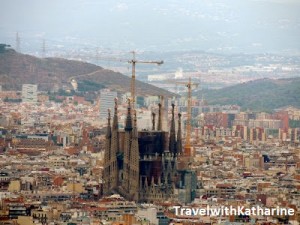 Look up. In Barcelona, Antoni Gaudí is revered as a Spanish god. His passion for modernista architecture revitalized Barcelona’s cityscape, and made it one of the most architecturally interesting metropolises in the world. All travelers must visit the famed Sagrada Familia, Gaudí’s unfinished Roman Catholic cathedral, and wander the grounds of Park Güell, Gaudí’s housing development turned fanciful community park. But the best way to drink in Barcelona’s captivating architecture is by keeping your eyes above the tree line when touring the city. You’ll be surprised by how many lesser-known Gaudí gems you’ll uncover, while also appreciating Barcelona’s respect for old and new construction.

Forget your plans. Life moves a lot slower in Barcelona. The Spanish siesta is alive and well, and the city embodies more of a beach-town vibe than a traditional European capital. If you really want to fit in with Catalonian culture, then make sure to schedule unscheduled time. Spend an afternoon lounging on the beach. Wander La Rambla, the wide, meandering boulevard filled with colorful restaurants and shops, and enjoy an afternoon sipping sangria under shaded awnings.

Best yet, plan an entire day to explore the enchanting Gothic Quarter. The pedestrian-only neighborhood was once a Roman village, and today features buildings from both Roman and Medieval times. The intricate streets dump out into a network of squares, or plaças, where travelers can enjoy street performers, wander local markets, and people watch. By leaving time for uninhibited exploration, travelers can immerse themselves in the true culture of Barcelona.

Barcelona is one of the world’s most unique and enriching cities, and a must-visit destination for every traveler. If you’re dreaming of a Spanish getaway, now’s the perfect time to experience this vibrant and unique culture!