The true colors of Cuba: Part 1 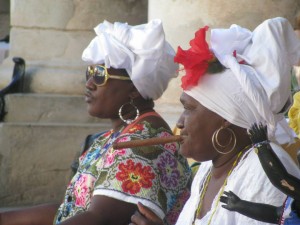 Travel opens peoples’ minds, hearts, and souls, and allows them to form new, authentic opinions about the world. This sentiment couldn’t be truer than among our people-to-people program travelers who visit Cuba through our specially licensed program and experience a world that has been shut off to Americans for decades.

That exact experience happened to Barry Ostrow when he traveled to Cuba on Friendly Planet Travel’s Colors of Cuba tour. We caught up with Barry to get a personal account of his people-to-people excursion to Cuba. Here’s the first half of his story, be sure to check back soon for part two.

Day 1: On my first trip to Cuba, I legally arrived with 21 other travelers in Havana to begin my U.S.-sanctioned Friendly Planet people-to-people tour. The tour introduced us to the social, historical, and educational aspects of Cuba, and it certainly opened my eyes to life on the beautiful, yet troubled island. The narrative of the trip was frank with no holds barred. We saw all of the good things the island had to offer, as well as the bad.

Clearing Cuban immigration was a breeze. Then we immediately met up with our wonderful guide, Neicy, and drove to Old Havana.

As we walked the narrow cobblestone streets in Old Havana, we noticed the iconic 1950s era cars, but surprisingly there were many newer-model cars made in Japan, Russia, and China. We then stumbled upon Plaza Vieja, a beautiful square lined with restored churches, government buildings, and old mansions. We then ambled through hundreds of stands at a used book market, and I was surprised by the wide range of books on display — from Che and Fidel literature to The Diary of Ann Frank.

Our first day ended with an excellent dinner at the Ivan Jusco Restaurant in Old Havana. Neicy told us that the restaurant was a paladar, a privately owned business. She explained that the Cuban government is beginning to encourage a private economy, but most businesses are still state owned. In fact, paladars are among 165 businesses that can be licensed to operate independent of the state. To my surprise, Neicy admitted, “My generation likes all the things the government does for us now, but we would like to see more economic freedom. We want both.”

On our first night we stayed in the The Telegrafa Hotel. While the hotel itself had seen better days, I was shocked that all the rooms had large flat-screen TVs and CNN!

Day 2: The second day we visited Pro Danza, a dynamic dance studio that takes in young, talented children, and develops their dancing abilities. Watching them perform their jazz routines was amazing, as they were rehearsing to take their show on a European tour. 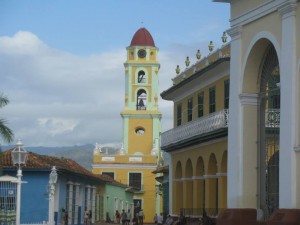 We visited a senior center and a preschool program both housed in a former convent. We learned that Cuba’s population is growing older as the birth rate stalls. Women are now entering the workforce and birth control is readily available as there is an easing of religious prohibitions.

We then visited Plaza de la Revolución, the square where Fidel Castro would deliver his rambling speeches to more than a million people. Today, a gigantic portrait of Che Guevara towers over the square.

As the light began to fade, we met up at the Palacio de la Artesania, where we tasted Cuban rum, coffee, and cigars. Gazing down the street, we could see bits of the city’s extensive fortifications built in the 18th century to protect the city from pirates, and now contrasted by a waterfront Ferris wheel.

Day 3: The next morning we took in the rugged Cuban landscape on our drive to Santa Clara and Trinidad. In Santa Clara, we visited the Che Guevara Mausoleum, where Che’s ashes lie in an alcove marked by a simple red star as an eternal flame burns a few feet away. Across the hall, a well-planned museum follows his life from boyhood to hero or terrorist, depending on your point of view.

In the city, we visited a regional middle school for the performing arts. Again, we were treated to a group of teen dancers who danced to the African rhythms.

Then we set out to Trinidad.

On arrival in Trinidad, we checked into the Iberostar Hotel that sits on a small community square buzzing with activity almost around the clock. In one corner sat a line of outdoor phone booths — very 20th century.

Day 4: After an excellent night’s sleep in Trinidad, our group set out on foot to explore the nearby Plaza Mayor. The city is filled with old colonial buildings dating back to the 1600s, the oldest of which has been converted into a snack bar.

We then climbed a viewing tower in one of the small museums to catch amazing sights of the town and the Caribbean, but be warned, the climb is long and narrow, and not for the faint of heart or weak of knees. 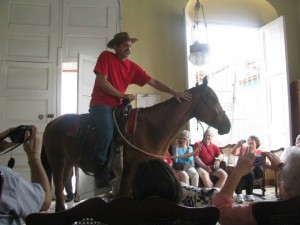 Next, we met Julio Muñoz, owner of a privately owned bed and breakfast and Cuban horse whisperer, who explained to us the unique process of obtaining a license and building his business. Julio was proud of his establishment, and was even undergoing construction to add three more rooms, yet when asked when the construction would be finished he remarked, “Who knows? This is Cuba.” He then proceeded to amaze us by opening the front door and leading a horse into the house.

We ended our day at a salsa dance club under the stars. Hundreds were packed around the tables that surrounded the dance floor, but only a few brave souls actually danced to the live music. It was the perfect venue to people watch to a Cuban beat.

Cuba is a country that opens minds and changes perceptions. To hear the rest of Barry’s eye-opening journey, check back on the Friendly Planet Travel blog.