Finding the spiritual side of Thailand

Most visitors to Thailand are struck by the obvious spirituality of the place, a paradox in a way, because life, particularly in Bangkok, is as frenetic and modern as anywhere in the world. Over 93 percent of the population in Thailand practices Buddhism, according to the Pew Research Center, and this religion permeates almost every aspect of life there – from the culture to the architecture to the people.

So it’s no surprise that visiting Thailand was a once-in-a-lifetime experience for Liz Hutchins, a member of the Friendly Planet Travel Reservations Team and our resident SE Asia expert, and you’ll see why when you read her account of her trip to this fascinating destination.

“My trip to Vietnam last year helped me realize that I absolutely love traveling to Southeast Asia. Once I was advised I was being invited by the tourism board to see Thailand, I literally jumped at the opportunity. The spiritual side of Asia has always been a big part of its draw for me. I was brought up as a Christian, but I have always appreciated and respected all religions, Buddhism in particular. Getting to immerse myself in the Buddhist culture was very eye-opening, and as you can see, was right on time, for I was about to enter a new chapter of my life …

Our tour started in the busy city of Bangkok. Here we saw popular sites like the Grand Palace and the Reclining Buddha. Because of their enormous significance, each site had more tourists than the last, which made our experience feel very fast-paced and exciting. But my favorite temple that we visited was Wat Phrathat Doi Suthep. 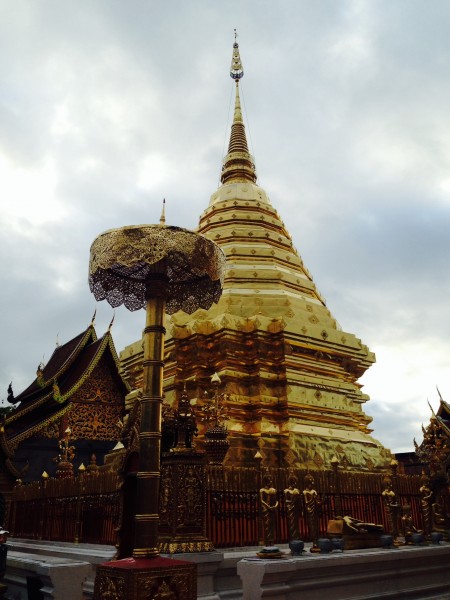 We woke up before sunrise each day to give alms to the novice monks outside the temple. This is the only time of day when the novices can obtain food. We paid a small fee to a woman who has pre-made meals on a tray to give, consisting of rice, fish stew, fruit, and water or juice. We each take one, and we fill their “alm bowl” with the food. The women all have their legs covered so as not to distract them, and the novices never make eye contact. After we make our offerings, we would kneel before them as they said a blessing for us. 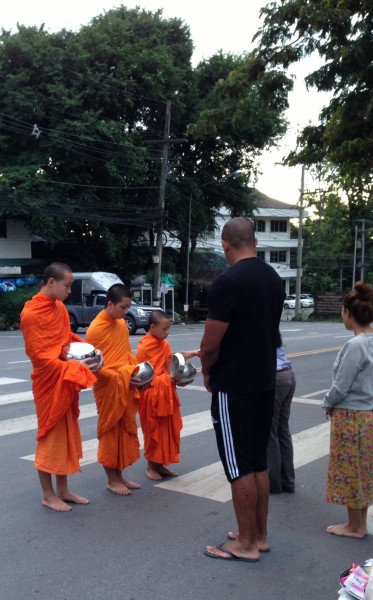 We then were given an unopened lotus, and we were told that a way of meditating is productive meditation. That means that you quietly think while doing something like folding the leaves of a lotus to make it look as though it has bloomed. We all took time to do this, and I have to say that I really liked how mine turned out! 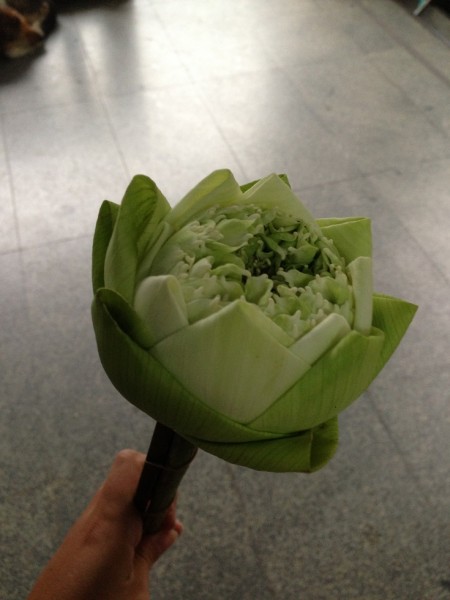 This lotus was then used as an offering when we made our way up to the top of Doi Suthep, the second tallest mountain top in Chiang Mai Province. We drove up the winding road, and all the while, I felt very nauseous. In fact, I had started feeling sick the day before, but I chalked it up to the altitude and the winding roads. Once we reached the view point, we stopped to take photos as the sun was rising, and it was truly breathtaking. Even though I wasn’t feeling well, just the fact that I was seeing such a magnificent view, surrounded by new friends, made me feel very at ease.

Once we arrived at the temple, we took a tram up to the top, and when we entered the complex, it was clear this was going to be a special moment. The air was cool, chilly even, which was a wonderful relief from the heat we were used to. There was also not another tourist to be seen, only our small group of nine. We quietly walked clockwise around the large golden pagoda, thinking about things we hoped for the future. As I rubbed my tummy to help with the sickness, I couldn’t help but hope for a baby. 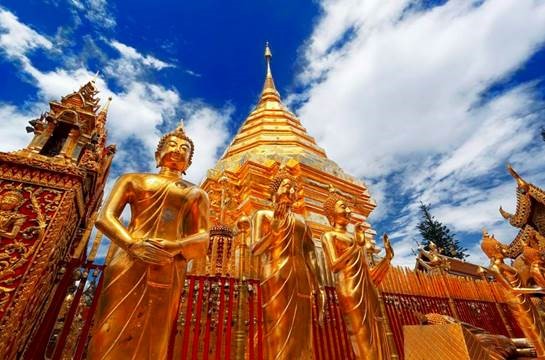 We stopped only to give our lotus blossom to our personal Buddha. We learned earlier what Buddha we should pray to, depending upon the day of the week we were born. Mine was a Buddha holding an alms bowl, much like the novices we had seen earlier that morning. This signified I would never be without money, which was a good thing to hear, given my hopes for the future. I laid my lotus blossom in front of the icon, and then went inside the temple to pay my respects. I knelt with our guide who was bowing and praying to a very old, and no doubt wise, monk. He blessed us all, and splashed what I could imagine was holy water on to us. As my guide explained why I was there, he said in English to me, “good luck”.

This moment was very special to me, because it represented everything that was amazing about Thailand. You cannot help but feel connected on a very deep level to the culture and spirituality that surrounds you. Thai people take Buddhism very seriously, but they are always more than willing to share their views with you, and never with an ounce of judgment or motive. I felt very lucky that I was able to experience a morning like this in such a beautiful and special country.