I wrote about Aung San Suu Kyi and the progressive changes she’s making in Myanmar (also known as Burma) a little over two and a half months ago. During this time, considerable strides have been made towards democracy after decades of military rule.

This includes the election of Aung San Suu Kyi, the leader of the National League for Democracy opposition party in Myanmar, to parliament on April 1. While her party’s swearing in was delayed because of a dispute over the wording of the oath of office, a compromise was agreed to yesterday, and Aung San Suu Kyi was sworn in to Myanmar’s parliament today!

Aung San Suu Kyi has already been invited to Europe to attend meetings with high-ranking officials. She also plans to visit Norway to show her gratitude for being awarded the Nobel Peace Prize in 1991 for her peaceful struggle while on house arrest as a political prisoner for almost two decades.

It seems very fitting that this woman, who has been a symbol of freedom for so many people, will now have a chance to accept the Peace Prize in person! This will be the first time in 24 years that Suu Kyi will travel outside Myanmar, as she had previously feared that the military junta would refuse her entry back into the country.

I have been personally fascinated by this woman, who has been revered as a worldwide symbol of peace, along with such figures as Nelson Mandela and even Mahatma Gandhi. When Suu Kyi announced that tourism to Myanmar only supported the military junta — not the people — and therefore should not be encouraged, I listened. This was in spite of many requests from our clients who wanted to go there.

So you can imagine our excitement when Suu Kyi, in clear recognition of the loosening of the generals’ iron grip on the country, announced that the time was right to come and visit. We went right to work on our long-anticipated program.

I am personally very excited that our Myanmar program is so rich and affordable. We hope that means many people will visit now, before the modern world swoops in. Evidently our timing for introducing tours to Myanmar coincided well with the public’s interest to travel to this country in Southeast Asia, as the reception of our Mystical Myanmar tour has been fantastic. All but one of our six departure dates are sold out. Our first group has already returned from their trip and our second group is traveling in Myanmar now. Friendly Planet plans to have many more departures to Myanmar in 2013.

Here is some early feedback and pictures from our first group, which demonstrates more poignantly than words what a wonderful and moving experience it is to visit this country:

“We’ve taken several tours to Asia and this was one of the best. We’ve traveled to many different places and the people in Myanmar are some of the nicest people we’ve ever encountered. It just doesn’t get any better than this. Our tour was at an ideal pace — very busy, but not exhausting. We had the best accommodations, great food and a wonderful guide.

If there is anyone who might be hesitant about this trip, I’d say they need not be as safety was never in question! English is widely spoken, making interaction with local people even more enjoyable. We were fortunate to visit a village on the last day of school where the kids were putting on a program for the parents. There were so many interesting experiences that it’s impossible to name them all! They’ve just started to seek more tourists and I think it will get crowded when word gets out about this wonderful place. Our photos can show what we saw, but they don’t capture the feeling you get from the wonderful people there.” 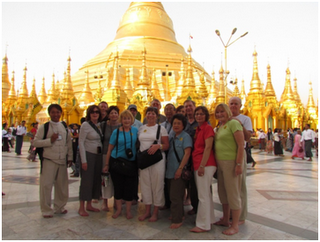 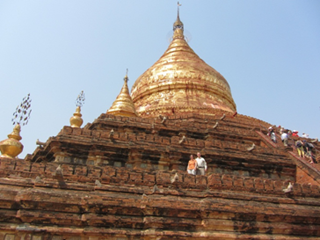 Jim and Toni climbing a pagoda 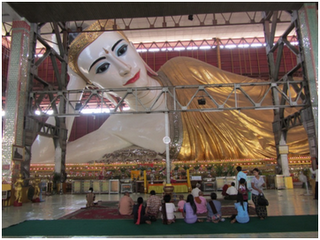 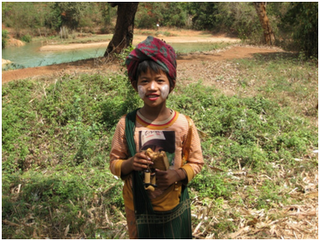 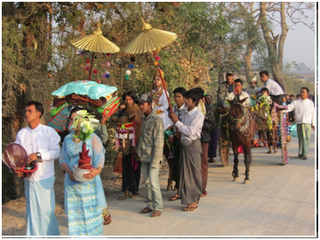 A wedding procession in Myanmar