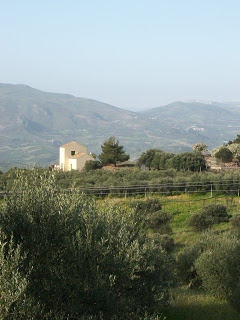 I closed my previous post in this series talking about my 8 a.m. wine tasting appointment. And I wasn’t kidding! We woke up early to disembark at Heraklion, Crete. Crete is the largest of the Greek Isles, and has a culture and dialect that has remained separate from that of mainland Greece. Heraklion is the largest city on Crete and is also the capital.

Right after stepping on land, our group boarded buses that would take us on a half-day shore excursion, appropriately named, A Taste of Crete. The drive itself was breathtaking. We followed a winding, two-lane highway through the countryside that came right up against olive groves and vineyards that seemed to go on forever.

We arrived at a modern winery about 30 minutes from Heraklion where we watched a film about how local wines, olive oil, and raki (a strong alcohol made from the pulp, skins, and seeds of grapes) are made; and how important these goods are to the culture and traditions of Crete. We had a chance to try each of the wines made there, and many people bought bottles to bring home with them. 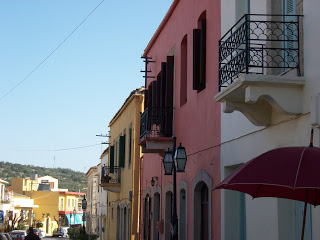 Then we were back on the road. On route to our next destination we stopped along the side of the road at a spot where you can take beautiful pictures of the landscape and one of the oldest farmhouses in Crete, dating to the Minoan period 16th century B.C.

We arrived in Archanes a short while after. This settlement sits on the site of an ancient Minoan settlement that spread over the same area. It is a beautiful, quaint town who’s economy is based largely on grape and olive processing and marketing.

Our group entered a local tavern where we got to try a number of Cretan foods: olives, cheeses, breads, desserts, and yes, even raki. So now it was about 10 a.m. and we’d already sampled six kinds of wine and one of the strongest drinks you can get in Crete. This made the next part much easier: dancing with traditional Cretan dancers! I shot a quick video of the four dancers who showed off their moves. You won’t see this in the video, but every single person in the room was up dancing in a circle led by the pros. 🙂

After a morning spent eating and drinking, we headed back to Heraklion and boarded the Aquamarine once again, setting course for our last, and probably most anticipated stop: the beautiful Santorini!