6 Things to Know About the New Cuba Travel Rules 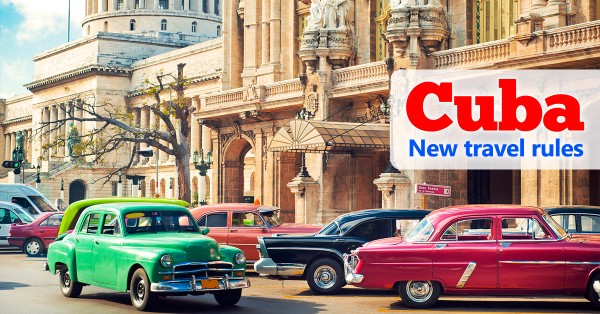 A new era in travel to Cuba has begun, with revised rules for U.S. citizens in effect as of January 16, 2015. President Obama’s December 2014 announcement regarding easing decades-old restrictions on travel generated huge interest and curiosity—but also some confusion.

In reality, it’s actually been legal for US citizens to visit Cuba since 2011, when new regulations were put into place allowing licensed travel under the proper conditions. Since that announcement, the unprecedented wave of calls and bookings is reflecting a poignant indication of the great interest among Americans in travel to the once-forbidden island.

We’ve reviewed and parsed the Department of the Treasury’s Office of Foreign Assets Control (OFAC) Cuban Assets Control Regulations, 31 C.F.R. part 515 (the “CACR”), so we can provide you, the traveler, a quick summary of the rules. (Updated Sept. 3, 2015.)

1. You’re still not allowed to spend a week lounging on the beach.

But educational travel is fine! In order to go there, you will still need to certify, by signed affidavit, that you’re traveling for one of 12 categories of authorized travel. You’ll need a full time agenda for each day you’re in Cuba focused on that reason, and you won’t find getting a tan at the beach on the list. “People-to-People” cultural exchange tours fit the new rules, and they will continue as usual. A tour company that’s experienced in Cuba travel can help you navigate all the details and make it easy.

2. You can now bring home cigars and rum legally.

Finally, you’ll be able to bring home $100 worth of cigars and/or rum. You’ll also be able to bring home another $300 in other purchases, for a total of $400 in souvenirs. Original art, music and educational materials such as books aren’t subject to the $400 limit, so if you find that amazing original painting (and you’ll have plenty of opportunity to do just that), you can buy it and bring it home legally.

3. Eventually, you’ll be able to pay with a credit card.

Now that’s a big deal. Travelers visiting Cuba have been forced to carry cash and exchange dollars for CUC’s, the Cuban currency. Once U.S. banks have set up the infrastructure in Cuba, you’ll be able to use your credit card to pay for incidentals at the hotel or even that amazing painting you want to hang in your living room. This will take some time to implement the new rules, since as of this moment, one small south Florida bank has officially begun working directly with Cuba. But it’ll be a huge convenience once truly implemented.

4. Flying to Cuba is going to get easier.

It will take a little time for the U.S. Department of Transportation to create the procedures and guidelines to make scheduled service from the U.S. possible. For the moment, no U.S. airlines are flying directly to Cuba with regularly scheduled service, although several are looking at the possibilities. JetBlue, through its association with Cuba Travel Service, a charter operator, is already operating flights from New York and Ft. Lauderdale. And United Airlines has announced that it will soon begin service from Newark and Houston direct to Havana. You can still fly to Cuba via Canada, Jamaica or Cancun, but those routes mean more travel time as well as cost. For now, charters, mostly from Miami, remain the least expensive and most convenient way to arrange the trip.

5. Cruises to Cuba are now legal.

It’s hard to believe that not so long ago, the idea of cruising from Miami to Cuba was a dream unfulfilled. Today, there are already several People-to-People cruises available. However, you’re not going to avoid the full-time educational aspect still required of U.S. travelers to Cuba. Whether they originate in Miami, Havana or Jamaica, these cruises all feature a schedule of activities designed to comply with OFAC rules, including on days at sea. One major advantage of these cruises is that they typically circle the island, taking travelers from Havana all the way to Santiago, and points in between, making it possible to see a lot of the island in a as little as a week. One major disadvantage is that these cruises cost a lot, due to the extensive programming and legal requirements involved in operating the educational program. Keep in mind, too, that you’ll be spending your nights aboard your ship, so dinners, while prepared Cuban style, won’t be in any of those awesome, privately-owned “paladars” that are run by a new breed of Cuban entrepreneur and flourishing thanks mainly to U.S. tourists.

6. Travel with a group is the best way to avoid a lot of hassle and keep the cost down.

According to the new rules, you will need a full time program of activities that comply with your signed affidavit of purpose. The best and least expensive way to adhere to these rules is to book into a group tour that has taken all the rules—and your best Cuban experience—into consideration. These groups book into the most appropriate accommodations for American travelers, and they include the experiences that are hard for travelers to arrange on their own. Considering the bureaucracy still associated with Cuba travel (new rules notwithstanding), having a full-time tour manager, in addition to the guide, goes a very long way toward smoothing out all the unexpected wrinkles and ensuring you have way more fun than you’ll ever believe.

While thousands of U.S. travelers have had amazing cultural journeys to Cuba, it’s still not yet ready for prime-time mass tourism. Until there is sufficient infrastructure, and a lot less bureaucracy, it is proving difficult to handle the growing numbers of general tourists that want to visit. For now, until more hotels are built, more guides are trained, and more restaurants are opened, established group tours operated by experienced tour operators with deep local contacts and plenty of guaranteed hotel rooms will remain the best bet for travelers who want to avoid problems and enjoy the authentic Cuba right now—before it changes forever.