Greece off the beaten path: 6 of the best less-known Greek islands 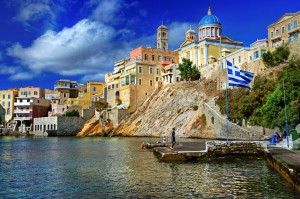 When you think of spectacular Greek islands, most people picture the black sand beaches of Santorini, the whitewashed villas of Mykonos, and the stunning landscapes of Crete. While Santorini, Mykonos, and Crete are spectacular, they’re not the only jaw-dropping islands Greece has to offer.

With more than 6,000 islands dotting the Aegean and Mediterranean Seas, there’s no end to the number of sun-drenched isles waiting to pamper visitors with scenic beaches and quaint hillside towns. Here’s a list of some of my favorite lesser-known Greek islands.

Located in the heart of the Cyclades, a group of Greek islands, Paros’ ancient villages, cobblestone streets, and bougainvillea-covered whitewashed villas make this island one of the most quaint in Greece. The island’s golden sand beaches appeal to families and honeymooners alike while the cool island breezes draw in watersport enthusiasts eager to kiteboard and windsurf. In the capital city of Parikia, visit Panagia Ekatontapyliani, the Byzantine “Church of 100 Doors,” to get a taste of the island’s history.

To escape the rush of tourists, sail 144 kilometers southeast of Athens to Syros. Once there, visit the city of Ermoupoli, the capital of the Cyclades and a UNESCO World Heritage Site. Wander among the town’s neoclassical houses and sample the local specialty, halva pie, made from roasted almonds and honey. Then travel to Ano Syros, a town that was once a medieval settlement and now stands as an intricate web of whitewashed villas that overlook crystal-clear water.

Kos is the birthplace of Hippocrates, the father of modern medicine, and a perfect destination to introduce visitors to the healing power of nature. The island is famed for its long strip of clean, white beaches, and rolling fertile farmlands that produce grapes, figs, and olives. Visitors should venture to Kos Town to see the impressive Castle of the Knights of Saint John, which sits atop a hill and guards the turquoise harbor. Finally, hike among the remains of the Asklepion complex, which was built after Hippocrates’ death as a medical treatment and research center.

Rhodes is the must-see island for history lovers. Nicknamed the “Island of Roses,” the old town of Rhodes boasts a fascinating web of Byzantine, Turkish, and Latin ruins. Discover the Palace of the Grand Master, once a byzantine fortress, then transformed into a palace by the Knights of the Order of Saint John. Journey to the town of Lindos and hire a donkey to carry you up the mountain to the Acropolis of Lindos, which offers stunning panoramic views of the azure seas.

Ios embodies the quintessential image of a Greek isle. Wrapped with white beaches that stretch around the entire island, Ios features classic whitewashed villas with blue domed roofs, and a mesmerizing array of windmills that dot the island’s rolling countryside. Discover the tomb of Homer, “the poet of poets,” and travel among the island’s timeless villages. Finally, experience the island’s electrifying nightlife by exploring the numerous bars and nightclubs open until the wee hours of the morning.

Venture to Symi, an upscale Greek island popular with international jet setters. Sail to the harbor, revered as one of the most beautiful in Greece, and walk the ancient 500-step footpath of Kalí Stráta that connects the city of Symi to the upper part of the town. Glimpse Kastro, a Byzantine castle built by the Knights of Saint John, which now overlooks the island’s multicolored villages fastened to sloping hillsides.

The Greek isles are renowned for stunning scenery, tranquil beaches, and quaint villages. If you’re dreaming of a Greek island getaway, consider deviating from the obvious, and explore some of these lesser-known destinations. I promise you won’t be disappointed.

Also remember to enter our Great Greece Giveaway for your chance to experience the some of the amazing Greek islands for free! There are only a few days left in the sweepstakes, so make sure to enter your submission.