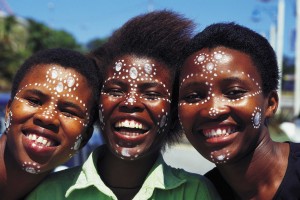 Any seasoned traveler will tell you how important it is to prepare for a trip abroad by learning the basics about your destination. You should be able to speak a few words in the local language, enough to respect its traditions and culture, and become familiar with its food. This is even more important in multicultural destinations like South Africa, home to 11 national languages and several ethnicities. There’s an abundance to see and do in South Africa, and knowing a few key phrases will help you fit in and make new friends as you enjoy the sights and sounds.

To help get you started speaking like a local, we’ve put together the first of a three-part blog post we’re calling our South African Explorer Series. These will offer insight into several major components of your trip: language, food, and culture. If you haven’t heard, you can also win a free trip to South Africa by entering on our Facebook page (now closed)!

Our series begins today with a list of the most common phrases and words you’ll hear when visiting South Africa. Pay close attention. Some of the words look and sound like English, but the meanings are completely different. 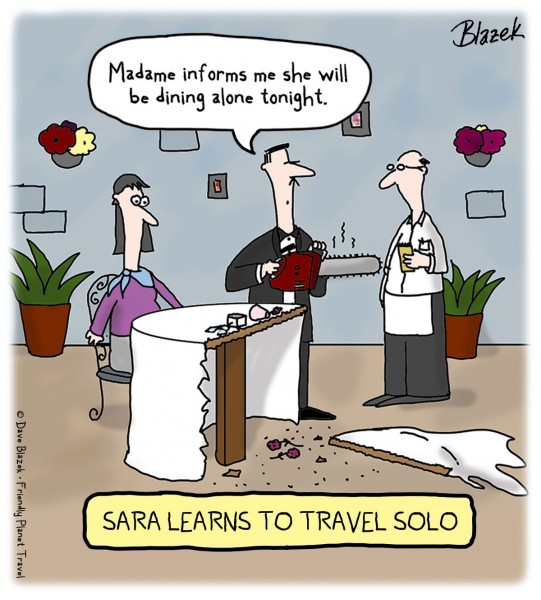 10 adventures that can only be experienced in South Africa 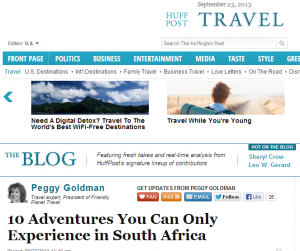 In case you missed it, we just announced our Win Wild South Africa Sweepstakes! We’re looking forward to sending a lucky winner and guest to witness the majestic scenery and cultural richness of South Africa.

While there are literally hundreds of unique and exciting things to see and do in this amazing destination, I contributed my personal list of top 10 adventures and activities to experience in South Africa in a recent article on Huffington Post. In my opinion, our winner (and anyone else thinking of traveling to South Africa) absolutely must see each of these magnificent wonders! Read my article to get all the details. 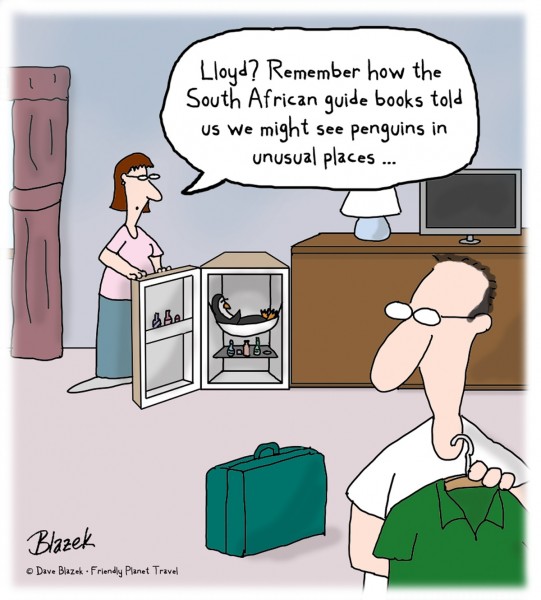 What it’s like to go on safari in South Africa 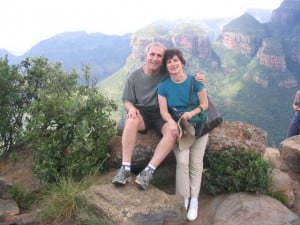 Today I want to share a blog post from my friend and our Product Development Manager at Friendly Planet, Judy Poliva. Judy grew up in South Africa, the destination at the center of our Win Wild South Africa Sweepstakes. I asked her to fill us in on what makes South Africa so special and she delivered, so read on. After you’re finished, be sure to enter to win a free trip for two to South Africa on our Facebook page (now closed)!

When we were children growing up in the Johannesburg area, we didn’t realize how lucky we were. We lived within driving distance of the Kruger National Park!

Almost every year during our winter school holidays (July), my parents would pack up the car with supplies, and we would head off on a self-drive safari, for a week or sometimes two. As we got closer to the park, my sisters and I would start practicing game-spotting by looking at the herds of cattle. 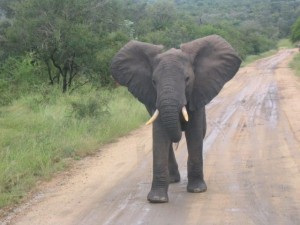 But once we entered the park, the competition started in earnest: who could spot the first animal (this was usually an impala), the first giraffe, or a lion! This was a daily, all-day competition, and we never tired of it. On our journey home, we missed being on the constant look out, and the cattle didn’t seem so interesting anymore.

We would be ready at dawn to start out on our game drive as soon as the gate opened. At every rest stop, we listened carefully as travelers shared their stories of what they had seen, so that we could head off there as well. We also had to remember to close all the windows so that the vervet monkeys or baboons didn’t try to steal our things.

If we saw some cars in the distance, we headed in that direction. Or we drove around, hoping to get lucky. At night, we would watch wildlife films in the open-air theatre at the camp or listen to a lecture by a game ranger. We would fall asleep listening to the sounds of roaring lions not too far away, and wake to the gentle coos of the bush doves. 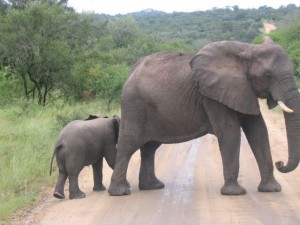 One of the most memorable of my childhood experiences was in the northern region of the Kruger National Park, a more remote area that had only one-lane dirt roads. There was no other car in sight. We came around a corner, and the road dipped down a sharp incline to a dry river bed and then up an equally sharp incline. As we neared the bottom of the dip, an elephant walking along the dry river bed started crossing the road. Then, another and another and another, a seemingly endless stream of these huge, majestic creatures. There must have been more than 10 elephants of all ages.

Suddenly, one of the larger elephants looked in our direction and raised its trunk, flapped its ears, and took a few steps in our direction. My father put the car in reverse and we slowly went back up the hill. My sisters and I were shrieking with a mixture of excitement and fear. The elephants eventually decided we weren’t so interesting after all. They continued their journey, and disappeared into the bush once more. Once again, we were alone on the road. 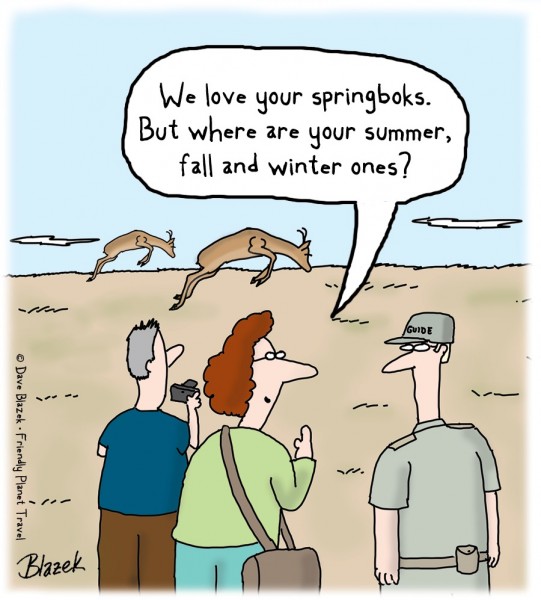 All of us who love to travel and who believe in bucket lists probably have listed South Africa among the most desired of all destinations. In survey after survey, people who love exploring the world mention South Africa as a must-see place, which makes perfect sense. Here are just a few reasons why South Africa should be on your own bucket list right now! And don’t miss your chance to enter to win a free trip for two to South Africa on our Facebook page (now closed)!

#1: It’s affordable.
And do we ever prove that with our all new Taste of South Africa tour, with departures starting at only $1,899 including flights, it’s hard to dispute that this bucket list destination is within the reach of most world travelers. 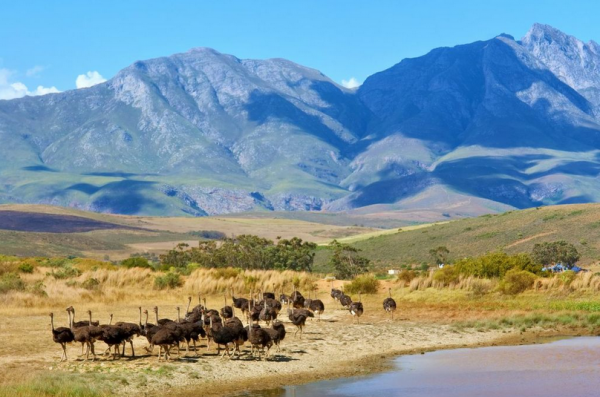 END_OF_DOCUMENT_TOKEN_TO_BE_REPLACED

10 items you don’t need when you travel internationally 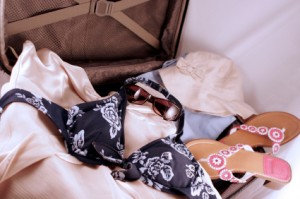 I recently shared my top 10 must-haves for international travel. In that post, I mentioned that I’d follow it up with a list of items that you might think you need to pack, but aren’t worth the space they take up in your suitcase.

Here’s my list of travel leave-behinds. Keep these items at home, and save some space in your suitcase for souvenirs and travel essentials.