Going abroad for the first time: One traveler’s experience in Ireland 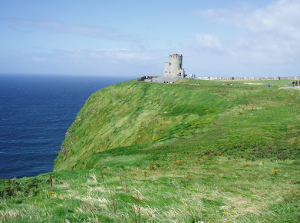 Today we’re speaking with Kristin Wagner, a member of our Reservations team. Kristin had never left the country before, so we’ve been looking forward to hearing how her trip on one of our Ireland tours went. We sat down for a Q-and-A with Kristin to talk about her experience in Ireland, and what it meant to her as a first-time international traveler.

FP: How was your overall experience in Ireland?

Kristin: It was just amazing. I had never traveled before, so it was my first trip out of the country.

FP: What was the experience of traveling alone like?

Kristin: Once I got there and met everybody, it was great. The people in the group were amazing and really welcoming. Once I met my fellow group members, it was like I wasn’t there alone.

FP: What would you say to other travelers who are considering traveling alone?

Kristin: Traveling on a group tour was definitely a plus for me. There were five other people that were also traveling alone in our group, and they each invited me to go to dinner with them or sit with them on the bus. Everybody was really inviting, and once I got to the destination, I didn’t feel like I was by myself. This is especially true in destinations like Ireland, where the locals speak English and it’s a safer destination. It’s a great place to go because you don’t have to be nervous about traveling by yourself.

FP: Did you like that everybody spoke English? Were the people friendly?

Kristin: Everybody was so nice there. It was a culture shock compared to how people act here in the U.S. You could go to a restaurant, sit down, and the people at the next table would start a conversation with you.

Kristin: I was lucky enough to have a direct flight from Newark, and it took about seven hours. It was an overnight flight on the way there, so I slept on the way over, and then on the way back, my flight was at 7 a.m. With the time difference (it’s five hours ahead in Ireland), it was early afternoon back home so the jet lag coming back wasn’t bad at all.

FP: What were some of the notable things that you saw and did while in Ireland? 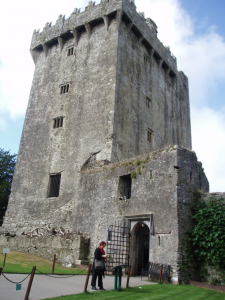 Kristin: The part of the trip that sticks out the most is the horse and buggy ride through Killarney National Park. They call it a jaunty carriage, and the carriage driver tells you about the different trees and plants you see. You also see old castles and ruins out in the middle of the lake. That was really neat.

Then there was Blarney Castle. I didn’t kiss the Blarney Stone though — I didn’t have the guts left over after climbing up the tower. To climb the tower, it’s over 100 steps on a spiral staircase that’s less than three-feet wide. So once you start going up, you can’t turn around and come back down. It was definitely worth it once I got to the top though. I would recommend it to anybody who is physically capable to just suck it up and do it. But once I got up to the top, I said I wasn’t going to kiss the stone. They hang you over the ledge, and push you out over the side of the castle — you’re holding onto a metal rail to kiss it.

FP: What were your thoughts about the landscape and weather?

Kristin: I took about 1,000 pictures on the trip, and probably 700 of them are landscapes. It was gorgeous — lush green land, wildflowers, and cows and sheep everywhere. We had clear skies, and not a lot of rain, so the lighting was really good for everything. As far as landscapes go, the Cliffs of Moher has everything else beat. You look out and it’s the ocean and cliffs — it was awesome. It was chilly, definitely sweater weather, but you didn’t need a coat or anything that heavy. In fact, when the sun came out, it was really nice.

FP: What was your favorite memory?

Kristin: The whole thing was really amazing, especially since it was my first trip abroad, but if I had to pick just one, I would probably say going to the Cliffs of Moher. If I could pick a second, it would be the cruise on the Corrib River. That was a great experience on a little riverboat where we saw a demonstration on how to properly make Irish coffee. Also, professional Irish dancers performed for us and even taught us how to do the Irish jig.

FP: Do you have any advice for others thinking of traveling to Ireland? 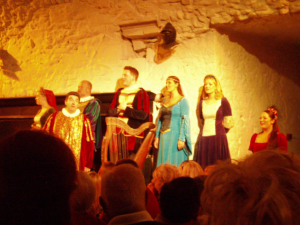 Kristin: Definitely try to find a traditional show, called a “trod.” It’s an Irish-style river dance and they’re held locally throughout the country. It’s so cool to see the dances up close in the venue. We went to Taylor’s Three Rock, which had traditional Irish songs and dances with Irish pipes. It was a great experience.

FP: Any other tips for people who are thinking about traveling solo and wondering if a group tour is the right choice for them?

Kristin: A group tour is good for people who are considering traveling alone. It’s especially true for this kind of itinerary, because you do have some free time. So if you do like to go off and do your own thing, but still want the comfort of getting to experience destinations with like-minded people, a group tour is the way to go. And for me, a major city like Dublin is a great location for that. It’s small and easy to get around once you have your bearings. If you’re a smart solo traveler, definitely try traveling as part of a group tour in Dublin!

Thanks so much for sharing your trip experience with us, Kristin! If Kristin’s experience has you dreaming of Ireland, be sure to check out all our Ireland tour packages.