Dazzling Dubai: A city of superlatives 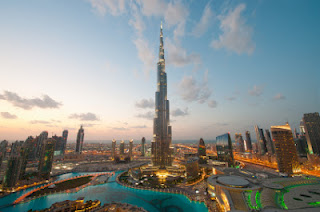 Fifty or so years ago, no one would have believed that the most lavish, luxurious, futuristic city in the world would be built, practically from scratch, surrounded by desert. Yet, that describes Dubai’s amazing metamorphosis into what is today the epitome of opulence among cities in the world.

There’s no shortage of amazing architecture, superb cuisine, hotels featuring every amenity imaginable, shopping galore, and creative diversions to amuse even the most bored billionaire.

The royal builders of Dubai have spared no expense in making sure this city is unmatched in extravagance. In short, it’s a city of superlatives. In Dubai, you’ll find the biggest, the tallest, the most expensive, the most daring, and so on. Don’t believe it? Here are seven fitting adjectives that provide a glimpse of what Dubai has to offer to lucky visitors.

Fastest. Dubai has been called the fastest-growing city in the world, and it’s no wonder why. Less than 50 years ago, Dubai was a sleepy trading port that sprang up out of the Middle East desert sands. Today, it is bigger, grander, and more lavish than any other city in the world.

Tallest. Dubai has no shortage of tall buildings, but one in particular that stands out (pun intended) is the Burj Khalifa, the world’s tallest building, rising 2,716.5 feet into the sky. This 160-story building stands as the magnificent centerpiece of downtown Dubai and is surrounded by colorful, Las Vegas-style fountains that shoot water high into the sky. Visitors can hop on the high-speed elevator to the observation deck for an indescribable view of the city.

Grandest. Dubai’s Palm Island is famous for being the world’s largest man-made island. In fact, it’s so big, you can see the palm-shaped land mass from space. Construction began nearly 20 years ago, and its logo-like shapes spanning Dubai’s coastline are on every visitor’s agenda for the sheer scope of the project. Each crescent of the palm tree houses a vast number of residential, commercial, and entertainment properties, including several uber-luxury resorts.

Most Expensive. If you’re looking for the most luxurious accommodations in the world, packed solid with royalty and A-list celebrities, look no further than the iconic Burj Al Arab. Widely described as one of the world’s only seven-star hotels and as one of the most photographed sites in the world, the Burj Al Arab defines contemporary architecture. It stands as the most magnificent (and most expensive) hotel in the world, with every amenity imaginable, including a private butler. No detail is overlooked for guests spending a night or more in this hotel. Guests enter the hotel’s private island off the mainland in a chauffeured white Rolls Royce (one of a fleet of 25 parked grandly near the hotel’s entrance) or by helicopter. Fireworks and dancing fountains in the hotel’s foyer announce your arrival. And this is just the beginning of the most luxurious experience you’ll ever have, as all guests are treated like royalty throughout their entire stay. And why not? A room can easily cost $1,500 a night and more!

Most Extravagant. Even the most well-traveled (and well-heeled) visitors will want to go shopping in Dubai. The city has been called “the shopping capital of the Middle East,” and it’s no secret why. The Dubai Mall, the world’s largest shopping mall with more than 1,200 stores, is essentially a city within a city. It’s a fashion avenue with a home for nearly every major iconic brand in the world. But the high-end brands are just the beginning of this shopping adventure. You’ll find among the expected, mall amenities like movie theaters and arcades, but you’ll also discover several over-the-top attractions, including an indoor ice rink, a theme park, an aquarium, and much, much more.

Shiniest. While the shopping malls in Dubai are second to none, Dubai’s souks (markets) have been around since the origin of Dubai and are a must-see for visitors. In particular, a stroll through the Gold Souk is a must. There you’ll find glitzy, glamorous gold in shop after shop — not just a few strands, bracelets, and rings, but lots and lots of gold. Forget about the jewelry shop windows you’ve seen at home. This is Dubai, where the quantities of glittering metal are in proportion to the place itself. Oh, and in the Gold Souk, shopkeepers are prepared to bargain.

Greenest. As crazy as it may sound, Dubai, though located in the desert, has plenty of green spaces. Actually, the proof that luxury living is alive and well in Dubai is found in the lush, green golf courses that are practically everywhere. Consider that Dubai is surrounded by the desert, where water is not exactly in abundance, and you’ll soon understand why all of this living, manicured turf is a sign of opulence and splendor. It costs plenty to keep these grounds tournament-ready. And all that green grass is framed by lavish, gorgeous botanical gardens, resplendent with every sort of tropical plant and flower. I’m talking about green as a rainforest, despite the fact that the heat can rise to 55 degrees Celsius (that’s 140 F!) and rain is rare.

In my many years of traveling to different countries around the world, I have not found another city quite like Dubai. It’s an anomaly as well as a city of the fastest, biggest, tallest, grandest, greenest, most expensive, most outrageous, well, you get the idea. You name it, it’s there, and it’s the reason Dubai has leaped ahead of other world-class cities to become a tourist mecca.

Take it from someone who has been many places and seen many things during my years of travel. If you could only take one more trip in your lifetime and want to experience unparalleled luxury for yourself, Dubai is the place to go.