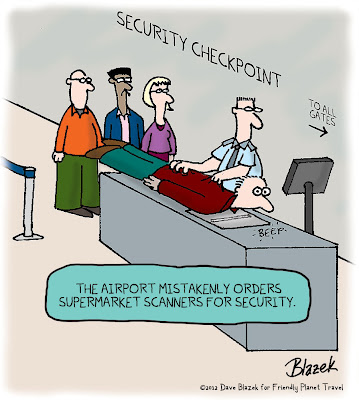 The Grannies on Safari’s Cuban Adventure Part 4: The best of Cuba

Few Americans have had the opportunity to visit Cuba in this lifetime. The Grannies on Safari, however, were given this opportunity courtesy of Friendly Planet Travel. These globetrotters came away with a new understanding of Cuban life, and formed their own opinions about what the best aspects of their trip were.

We hope our Cuba podcast series has helped build your knowledge of Cuba and highlighted all of the wonderfully rewarding experiences the country has to offer. Listen as Pat and Regina excitedly fill us in on their favorite parts of the trip, and why they’d love to go again. Also, if you’re interested in seeing their trip in its entirety on their television show, they give the details about the air date in the podcast.

Thanks again to the Grannies on Safari for speaking with us about their trip!

Having traveled both professionally and personally for over 30 years, I am often used as a resource for a wealth of travel questions. So you might have seen that we held our first-ever live chat on Friendly Planet Travel’s Facebook page. I answered many of our fans’ travel questions in real-time, and had a great time doing so. I wanted to share some of the biggest takeaways with those who missed it.

Q: What are the benefits of booking with a travel agency versus booking on my own?

A: The benefits are various, but mainly, you’ll save money. We spend a lot of time getting great deals for our passengers and we pass those on to you. Also, you’re getting plenty of expertise. All that research you’ll need to do, we’ve already done it.

Q: Out of all the cruises you’ve taken, which is your favorite and why?

A: Honestly, the very best cruise I have ever taken was on a small ship, part of the Cruceros Australis fleet, in Patagonia. I loved this cruise because it was an amazing adventure, not just fancy food each day — we visited some of the most pristine places in our hemisphere. Also, the size of the cruise was very conducive to making new friends.

Q: Do you save any money planning a trip far in advance?

A: It doesn’t always work out that way. Sometimes, especially with airlines and cruises, the best rates are not always available far in advance. However, with tour companies like ours, if we see opportunities to reduce cost, we always pass along the benefits, even at the last minute. The main reason to book early is to be sure you get the trip you want. If you wait, you might not get the space at all.

Q: Do you have any recommendations for traveling abroad, specifically to Ireland?

A: If you are traveling on your own, perhaps with a rental car and some basic hotel arrangements, you’ll want to check in with the Irish Tourist Board. It has a tremendous amount of information, plus plenty of recommendations for restaurants, pubs, and fun events, many of which are completely for free. Since there isn’t a language problem, you’ll meet plenty of warm and friendly people among the Irish who will share their personal favorites regardless of where you travel. Ireland is one the most accessible destinations for Americans.

Q: What would you recommend for a good girls’ getaway trip, one with lots of sightseeing but also some relaxation?

A: Go to Tuscany. It’s amazingly rich in touring opportunities; it’s gorgeous, friendly, with great food and plenty of opportunities to relax.

Q: Is it safe to travel to Greece right now?

A: You bet it’s safe. There is no problem with safety in Greece today. Not a bit. The Greeks have their issues with their economy. Tourist are not only safe, they are major personas MUY GRATAS. The Greeks will treat guests like royalty, and there is no reason at all not to consider visiting Greece this summer.

Q: When is it best to exchange dollar for Euros?

A: Never exchange money in the U.S. before taking a trip abroad. Your best exchange rate will be in the country you’re visiting. You can exchange some money when you arrive, usually right in the airport. That will get you started with local currency for tips or small purchases. Then you can check the local exchange places you’ll find everywhere or at the banks. You should check Travel.State.gov for information regarding specifics of customs, health requirements, alerts, and lots of other information. The site is for U.S. travelers, and it is very helpful.

I want to thank everyone who participated in our first of many live travel chats. If you missed it, we are holding our next chat on Sept. 7 at 1 p.m. EST. Join in and ask me your biggest travel questions. Just remember, it’s better to know before you go! 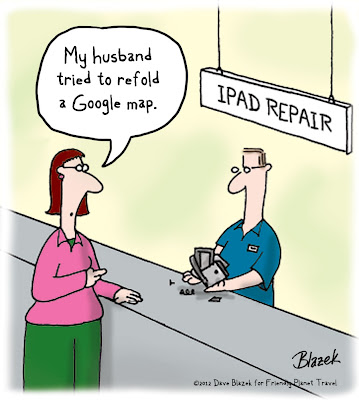 Pictures from the Grannies on Safari’s Cuban adventure

The Grannies on Safari have done a great job updating us about their Cuban adventure through our podcast series, but I’ve been itching to see some images from their people-to-people tour. Since their Cuba trip will not be aired on their PBS TV show until May of next year, I asked Pat and Regina if they would share some of their personal photos with us.

Because a picture is worth a 1,000 words, I thought I’d let their pictures speak for themselves. Here’s a snapshot of a Friendly Planet Travel people-to-people Cuba trip through the eyes of the Grannies themselves. 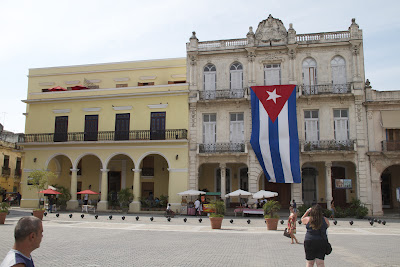 The Grannies first stop was Havana, where they visited Plaza Vieja,located in the center of Old Havana. Currently undergoing restoration, this square showcases the famous Cuban colonial architecture. 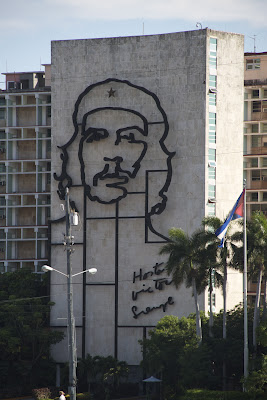 While in Havana, they also visited Revolution Square, which has held many political rallies throughout the years. An image of Ernesto “Che” Guevara is pictured on one of the buildings overlooking the square. 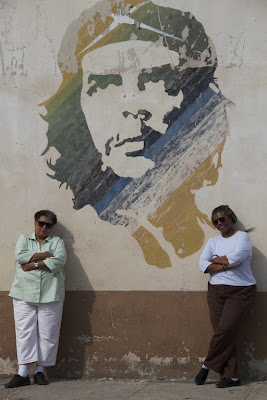 Regina and Pat pose next to a mural painting of Che Guevara. Known as a hero of the Cuban revolution, his image has become a cultural symbol in Cuba. 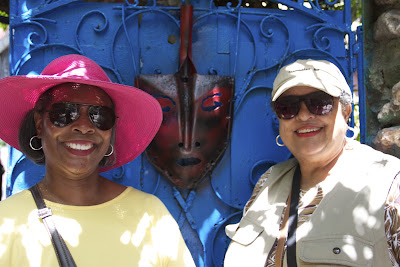 Masks play an important role in Cuban culture. They are often carved by street artists and used as decoration or sold for profit. 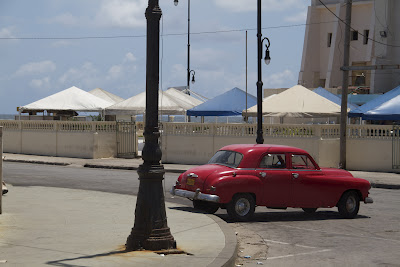 The Grannies loved the classic feel of Havana, especially the vintage cars scattered about the city. 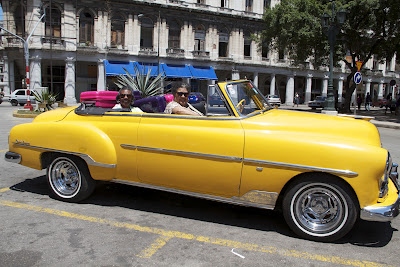 They even got their photo taken in a classic car! 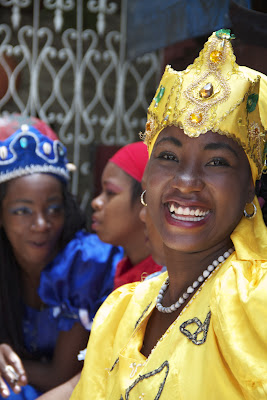 The Friendly Planet Colors of Cuba tour, which the Grannies traveled on, is a people-to-people trip that promotes contact with Cuban people through educational exchanges concerning art, music, and culture.

The Grannies learned how to make mojitos at the famous Hotel Nacional, and also had a great time tasting their creations. 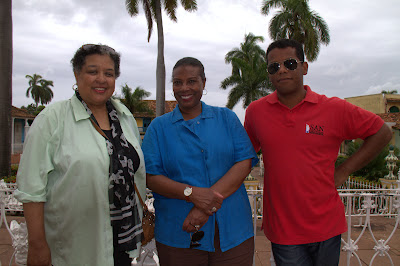 Regina and Pat loved their tour guide, Alejandro, who helped the Grannies have a meaningful experience in Cuba. 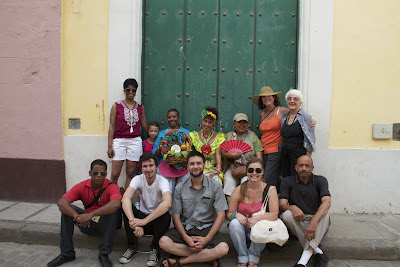 The entire Grannies on Safari group posed for a picture in Old Havana, including Pat, Regina, Alejandro, the production crew, and Regina’s granddaughter Alessandra.

From the looks of it, the Grannies on Safari had a great time experiencing the colors of Cuba! If you can’t get enough of the Grannies, keep an eye out for the final installment of the podcast series where they’ll spill more details about their trip.

Regina Fraser and Pat Johnson have no reservations about experiencing all the world has to offer. These Grannies on Safari travel the world and film their adventures for their TV show, so they often expect the unexpected.

But even the Grannies on Safari experienced some things they didn’t anticipate while traveling to Cuba on a trip sponsored by Friendly Planet Travel. Regina and Pat had the opportunity to get an up-close-and-personal look at the lives of the Cuban people not usually covered by mainstream media. Hear their stories below.

Stay tuned for the final installment of our Grannies on Safari’s Cuban Adventure podcast series.

Friday’s Friendly Funny: Where do you like to stay?

The Grannies on Safari’s Cuban Adventure Part 2: The tastes of Cuba

If you’re interested in hearing about Cuban culture, look no further. That’s because we’re back with another installment of our podcast with the Grannies on Safari, Regina Fraser and Pat Johnson, who document their world travels for their show.

Most recently, they ventured to Cuba, courtesy of Friendly Planet Travel. Take a listen to our interview below to hear all about their cultural adventures while in Cuba. Can you say cigars, mojitos, and black bean soup?

Keep an eye on our Grannies on Safari go to Cuba tag to hear more updates about Regina and Pat’s trip.

Friday’s Friendly Funny: What’s coming next from the airlines 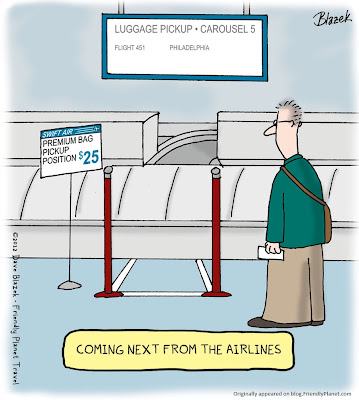 Experience histories and mysteries in Easter Island and Peru

At Friendly Planet, we’re crazy about exotic destinations, so you can imagine my excitement about our latest package. We’ve bundled together two of the world’s most wondrous sights — the massive, mysterious moai statues on Easter Island in the South Pacific, and the lost city of the Incas, Machu Picchu, high in the Peruvian Andes. And we’re doing it in major style, too.

Check out some of the images of the wonderful places we’ll be staying, as you browse pictures of the fascinating and exotic destinations themselves. Having just returned from both Easter Island and Peru, I can personally vouch for the transformative nature of this trip. You will definitely have an amazing time.

Here are some photos that I hope will give you an idea of what Easter Island and Peru have to offer, and maybe entice you to join us, too. 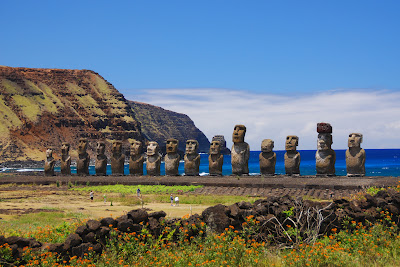 Ahu Tongariki is the largest ahu on Easter Island. An ahu is a stone platform, and it holds up moai. Moai are stone figures made to represent the living faces of deified ancestors. Toppled during civil wars and by a subsequent tsunami, the moai were restored in the ’90s. With the heaviest weighing around 86 tons, their remarkable creation remains one of the biggest mysteries of Easter Island.

More moai sit at Rano Raraku on Easter Island, a volcanic crater that supplied the stone from which about 95 percent of the moai were carved. Today, 397 moai remain at this World Heritage Site.

Even though Easter Island is technically a part of Chile, it finds itself influenced by its Polynesian roots. Here people enjoy singing and dancing to the music of their culture.

A Rapa Nui warrior does a traditional Kari Kari dance with other dancers in Easter Island. Often these type of ceremonial dances tell the stories of the island’s early Rapanui people. 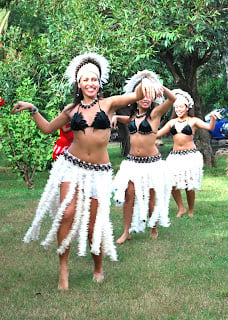 The Rapanui are the native Polynesian inhabitants of Easter Island, and most speak Spanish. With under 5,000 occupants on the island, you’re sure to get to know and interact with these friendly people.

Many claim that Easter Island is the most remote inhabited island in the world, and the culture remains pristine.

Machu Picchu, also known as the lost city of the Incas in Peru, remained hidden from the outside world in the mist-covered green mountains above the rushing Urubamba River for centuries. The complex consists of giant walls, terraces, and ramps constructed from precisely cut rock formations. Current historians believe it served as a country retreat town for Inca nobility.

The weaving village of Chinchero is worth a trip from Cusco. Mama and baby are adorable, but what you can’t see is that the mama is spinning alpaca wool with her hands while her baby rests comfortably on her back. The Chinchero women are master weavers, and you can buy gorgeous, handmade alpaca goods directly from them. 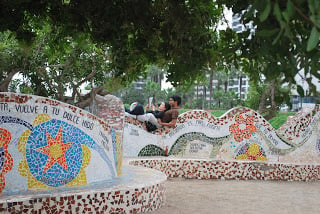 “Love Park” is located in Cusco, Peru. It’s a sweet little park that is completely encircled in this decorative mosaic tile. Check out the couple sitting in the curve of the wall. 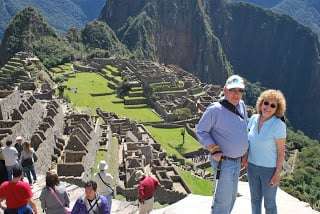 Here’s proof that my husband Ilan and I traveled to Machu Picchu. You can’t actually get the feeling of being up so high, among such majestic mountains, without actually being there yourself. But I hope the image gives you an idea. It is spectacular, and probably one of the singularly great travel experiences of my life.