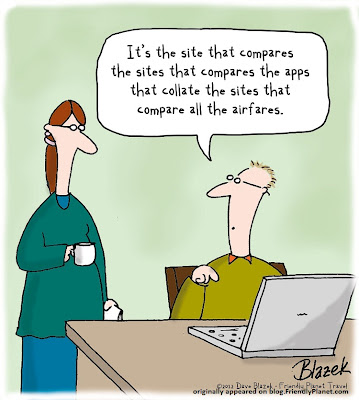 We started the Friendly Planet Travel Book Club so travelers and fans can connect and experience the joy of travel through reading. Since we had so much fun the first time, I’ve been eagerly anticipating the second meeting. This time around, we’re focusing on Cuba because of its vibrant history, culture, and people.

I wanted to pick a book that delved into Cuba’s rich heritage. But I’ve gone beyond that and picked three books about Cuba. To shake things up, we’re putting the book choice to a vote among our travelers, so you’ll have a hand in what we read. The three choices are:

“Telex from Cuba” by Rachel Kushner. Set in 1968, the novel tells the story of two young people growing up in Oriente Province in Cuba, a place where Americans tended 300,00 acres of United Fruit Company sugarcane. In the midst of the cane plantation were 100 acres the company did not own. Those 100 acres belonged to Fidel and Raul Castro’s father. The sons, who grew up excluded from a privileged American world, started the revolution there. The story is told from three narrators: a boy whose father runs United Fruit’s sugar operation, a girl whose father runs the nickel operation, and a French agitator who helps train the rebels.

“Mi Moto Fidel: Motorcycling Through Castro’s Cuba” by Christopher Baker. This nonfiction book tells the story of Christopher Baker as he drives his motorcycle through Cuba over a three-month period in the early 2000’s. He meets and speaks with the Cuban locals, some of which support Fidel Castro and some who do not. He explores the rich heritage of an island gripped by poverty, political uncertainty, and painful transition, all the while charting his own gradual but profound change of heart about the Cuban Revolution.

“Last Dance in Havana” by Eugene Robinson. Using music as a lens, Eugene Robinson shows readers the real side of Cuba and its people. Despite Castro’s attempts to shut down nightclubs, obstruct artists, and subsidize only what he wants, the musicians and dancers of Cuba cannot stop. In this provocative work, Robinson takes readers on a lyrical tour of a country on the verge of revolution, using its musicians as a window into its present and future.

So which one of these books do you want to read for our next book club meeting? You can read more or buy each book on Amazon.com, or at your local bookstore. Tell us in a comment below which book piques your interest and that you want to discuss with other travelers. And if you want to double your vote, Like our Facebook page and vote there too!

We’re gathering on April 17 at the Jenkintown Library to dive into the wonders of Cuba. Voting is open from now until March 6, and then I’ll announce the winner. I’m excited to see which book our travelers choose! 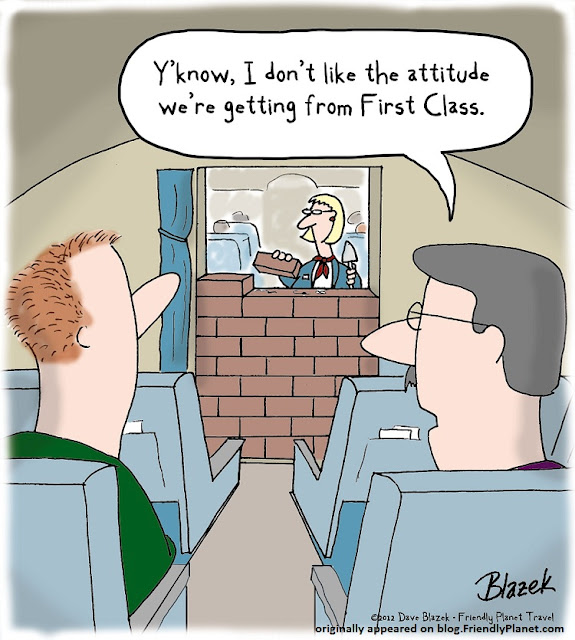 One surefire way to get any kid to do something is to tell them not to do it. That’s the lure of forbidden fruit. For travelers, forbidden fruit comes in the form of countries they can’t visit, due to government bans or other restrictions.

That was the case for travelers wanting to go to Cuba. But last October, we helped blaze the path into Cuba for American travelers, letting them taste the forbidden fruit of Cuba’s culture for the first time in over 50 years.

And now, that’s the case for worldly travelers who’ve been wanting to visit Myanmar, a beautiful country in Southeast Asia, formerly called Burma. You might have heard that political activist Aung San Suu Kyi, Nobel Peace Prize winner and vocal advocate against Myanmar’s former military dictatorship, began encouraging travelers to visit the country as a way to open up Myanmar to the rest of the world.

Suu Kyi had asked travelers not to visit Myanmar because she felt strongly that the repressive military regime should be thwarted from profiting from tourism. But now that the military dictatorship has been replaced by a new prime minister who is taking steps to improve life and freedom in Myanmar, Suu Kyi has invited travelers to once again come visit. While Myanmar is still far from becoming a modern democracy, the changes cannot be ignored. And when Aung San Suu Kyi asked, we listened.

We think this is a golden opportunity, as in the case of travel to Cuba, to use global tourism as a means to help bring a country from a dark past into a brighter future. To that end, we’ve just created a new tour to Myanmar that will give you a chance to experience this lush, tropical country.

Its Buddhist spirituality, natural beauty, and warm citizens make it among the most unique, friendly, and enchanting destinations in the world. In fact, it is said that Myanmar, as it is today, is like a glimpse into the past to a time in Asia before consumerism and other trappings of modern life began to invade and take over ancient culture.

But that’s just scratching the surface of why you should visit Myanmar. Here are five more reasons you should put Myanmar on your “must-visit” list.

Experience the revival of the Myanmar people. Suu Kyi has spent her life striving for democratic freedom for the people of Myanmar. Now that the path toward freedom is slowly opening, Myanmar’s people are experiencing a time of great optimism and joy as their country begins changing. Indeed, by visiting Myanmar, you are, in effect, an ambassador for peace and hope, and by your very visit, you are helping fuel the country’s revival.

Help Myanmar be a member in good standing of the global community. U.S. Secretary of State Hillary Clinton met with Suu Kyi last December to help restore Myanmar’s diplomatic relations with the United States and open international trade. This is setting the stage for Americans to follow. You can be part of this historic moment by being among the first to bridge the culture gap between our peoples.

Bask in Myanmar’s luscious countryside. This Asian country’s landscape has remained largely untouched by industry and development, ironically due to Myanmar’s history of repressive dictatorships. This contrasts greatly against the industrial countries surrounding it, such as Vietnam, China, and even South Korea. Travelers will get front-row seats to the simpler way of life the people of Myanmar live, in stark contrast to our fast-paced Western society.

Strengthen Myanmar by seeing it. Myanmar is an amazing destination to experience with all five senses. And everything you experience will help improve the economy by creating jobs and stimulating growth in the industries that touch tourism, such as hospitality, restaurants, transportation, retail, and more.

Friendly Planet Travel aided Myanmar during Cyclone Nargis. Cyclone Nargis tore through Myanmar on May 2, 2008, leaving over 140,000 fatalities and $10 billion of damage in its wake. When it hit, we reached out to our Friendly Planet travelers for their support to aid in the country’s recovery. They came through with flying colors by raising $15,000 in under 48 hours — I couldn’t have been more proud! If you were among those who supported Myanmar, you’ll be able to see those you helped firsthand.

If you’re ready to explore one of the most exotic and fascinating countries in Asia as a witness to a national transition in real time, I suggest that you consider Myanmar. And keep your eyes to the blog, as I plan to post more about Myanmar in the upcoming weeks and months. If you travel there with us, I’d love to hear about your experiences when you return.

Chris has been featured on the blog before, and he and I stay in touch on various travel topics. Chris and I caught up most recently at The Philadelphia Inquirer Travel Show and I was delighted when he sat down for an interview with me. One of my bloggers, Caitlin Davis, served as moderator. But I’ll tell you the truth — we didn’t do much preparation. Chris loves travel and so do I. It doesn’t take much to get both of us going on the topic, as you’ll see once the cameras started rolling. This is the first of three videos from this interview, so keep your eyes on this space for parts two and three. Hope you enjoy it!

Keep your eyes peeled for the next installment! 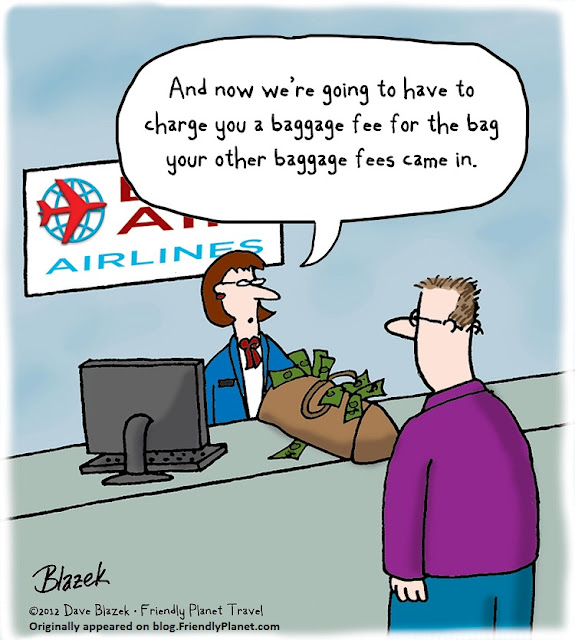 Tips for how to cruise safely 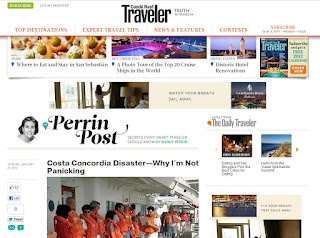 Any time there’s a travel disaster, the instinctive human response is to avoid that method of travel. This is a process known as cognitive dissonance, where humans have two conflicting viewpoints — we know travel is safe, but we worry because of the most recent disaster.

We wrote about this last year when we put together an infographic titled, “Is it safe to fly this holiday season?” Anyone who’s concerned about taking a cruise because of the explosion of news coverage around the Costa Concordia disaster should really take a second look at that infographic.

The reality is, you’re more likely to die driving your car to work then you are flying or taking a cruise.

Despite the fact that cruises are mostly safe, accidents that sometimes lead to tragic events can happen to anyone at any time. I thought Wendy Perrin’s list of cruise safety tips was excellent, which is what I wrote in the comment I left. I also plan to include her list in the documents we give to all cruise travelers. After you’re finished reading my tips for cruise safety, click over to Wendy’s post to read hers, because I think they’re really helpful.

Cruise safety tip #1: Talk about scenarios with your family. When was the last time you practiced a fire drill at home? Probably not recently. It’s the same idea with cruise safety — it’s better to be prepared before something bad happens. It’s good to know how to find the muster stations, but also talk to your family members about how your family will handle an emergency. If members are separated from each other and an emergency occurs, everyone should head to a previously decided upon muster station and meet up there. Trying to find your entire party before heading to the muster station can waste valuable time.

Cruise safety tip #2: Carry your cell phone. Most of the time, I tell travelers to unplug from their electronics while on vacation to enjoy the once-in-a-lifetime sights around them. But, in the interest of safety, it might be best to keep that cell phone on your person. You can turn it off and keep it in your pocket or backpack, but you’ll have it with you in case of emergencies. Although cell phones don’t get reception while in deep water, the Costa Concordia disaster took place right on the coast of Italy, where it’s possible to get reception.

Cruise safety tip #3: Have portable FM radios. Having your cell phone on hand is important, but it’s also a good idea to carry a small FM radio or walkie-talkie, because cell phones aren’t close enough to cell towers to work in the middle of the ocean. Your family can use them to communicate while on board, and if you need them in an emergency, they’ll be there. Remember to put fresh batteries in them every morning and you’ll be good to go all day.

Cruise safety tip #4: Enjoy your cruise. I’ve said it before and I’ll say it again: You’re more likely to get struck by lightning (about 40 people per year) than be killed on a cruise. So follow procedures, be aware of your surroundings, and then enjoy the vacation you’ve worked hard to take. Don’t spend your entire vacation worrying about what might happen. Instead, take the time to appreciate the wonderful places you’ll see, people you’ll meet, and the experiences you’re having.

Alright, what did I miss in this list? Anything that you would add? Tell me in a comment!

Friday’s Friendly Funny: Which Wall of China have you seen? 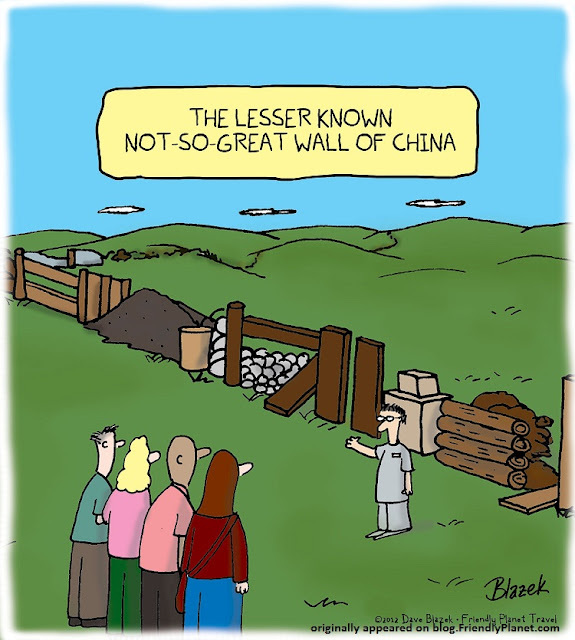