On the third day of our Athens and Greek Isles cruise, vacationers head to Piraeus, a large coastal city just 10 km from the center of Athens, where they’ll board the M/V Aquamarine. Travelers can pass their time enjoying the sun, warm sea breezes, pool, and shipboard facilities while they sail to Mykonos.
The island of Mykonos is famed for its cosmopolitan character and energetic nightlife (some say it’s the best in Europe), as much as it is for its labyrinth of winding alleyways and whitewashed buildings, basket-laden donkeys, and cascading geraniums. Chic crowds flock to the island’s trendy restaurants, discos, and clubs each night, and vacationers sit seaside, sipping ouzo and watching the sunset while listening to traditional Greek music. 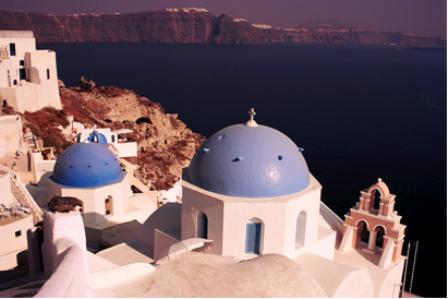 The next day takes travelers to Rhodes, the stunning “Island of Roses.” Historically, Rhodes was famous throughout the world for the Colossus of Rhodes, one of the Seven Wonders of the World.
In the heart of the island’s biggest city, also named Rhodes, is the largest inhabited medieval town in Europe, a fascinating web of Byzantine, Turkish, and Latin ruins. There’s no wonder why it’s been declared one of the few World Heritage Sites. Its mighty fortifications provide the finest surviving examples of defensive architecture of the time.
Lindos, with its dazzlingly white houses clustered beneath a soaring castle-capped acropolis, is Rhodes’ most picturesque village and most important Doric settlement because of its natural harbor and vantage point built 125 meters above sea level. Here, travelers can explore on their own, or take advantage of Friendly Planet Travel’s optional shore excursions. 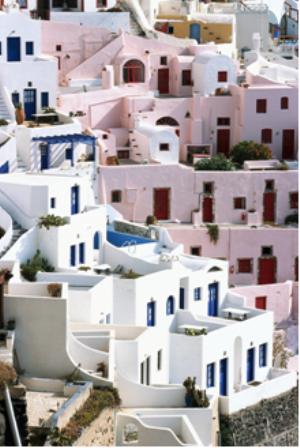 The following morning, the M/V Aquamarine docks in Kusadasi, Turkey. Just 10 km from the port of Kusadasi lies the ancient city of Ephessos, where travelers will find an archaeological site that ranks among the wonders of the world. The day’s optional tours include the the Great Theatre of Ephessos, which had a capacity of 25,000 people, and the Library of Celsus, dating from 135 A.D.
Vacationers will then sail to Patmos, Greece. The Aquamarine docks at Skala harbor, a lively atmosphere with whitewashed houses, flowered courtyards, tavernas, and shops. The Island of Patmos is famous in history as the place where St. John wrote the Book of Revelation. An optional tour takes you to the cave where St. John lived and the nearby Monastery, built on one of the island’s highest points, housing priceless icons and manuscripts in its Treasury.
From there, it’s back to Athens for a final few days in the Paris of the Mediterranean.