If three days of sailing throughout the Mediterranean just isn’t enough to take in all the wonders of Greece, there’s also an Athens and four-day Greek Isles cruise. The itinerary for the two vacations are almost identical, but on the four-day cruise, the M/V Aquamarine also docks at the most popular of all the Greek Isles, Santorini, as well as a stop at Heraklion, Crete.
Two Friendly Planeteers enjoying the breathtaking views of Santorini. 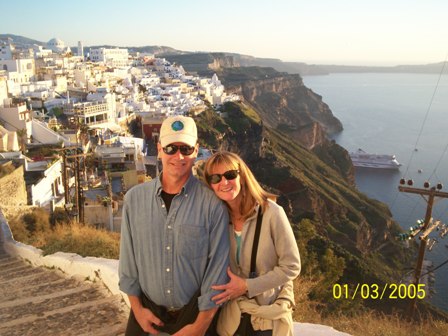 On the four-day journey, after a day in Rhodes, travelers will enjoy a trip to Heraklion. Just five kilometers from the Heraklion city center lie the ruins of Knossos — the capital of Minoan Crete and today the island’s major tourist attraction — which travelers can visit on an optional shore excursion.
Other points of interest here include Heraklion’s Archaeological Museum — one of the finest in the Mediterannean — which houses exquisite findings from Knossos and other Minoan ruins, numerous Venetian fortresses, and fountains and loggias scattered throughout the city.
At the Historical Museum of Crete, Byzantine and folklore collections are on display. The island’s open air market is a must-see, where colorful and boisterous crowds buy, sell, and trade everything from goats and sheep to enormous cauldrons of freshly churned yogurt.
The next port of call is Santorini. This striking island, with breathtaking panoramas and rugged landscapes, is actually a volcanic crater slightly immersed in the sea. The island is famous for its whitewashed houses, narrow streets, open-air cafes, and glittering boutiques which cling to steep cliffs, accessible by foot, cable car, or mule. Like Mykonos, it is not only Santorini’s physical beauty that makes it one of Europe’s most popular destinations, but its dynamic nightlife as well.
The island of Santorini was formed by one of the largest volcanic eruptions on the planet, which destroyed the earliest settlements on what was formerly a single island. The Minoan eruption (sometimes called the Thera eruption) occurred approximately 3,600 years ago at the height of the ancient Minoan civilization.
Vacationers can enjoy an optional tour of Santorini that takes them up along the Caldera (volcanic crater). They can also drive uphill along the rocky sides of the Caldera and pass through many traditional villages to Oia, a village that brims with many fine examples of Cycladic architecture. At the end of the day, passengers return to the ship for a final evening at sea before returning to Athens.